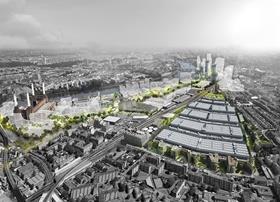 St Modwen Properties has confirmed that it is in talks to sell its 10-acre New Covent Garden Market site at Nine Elms.

The regeneration developer in a trading update said it had received interest from a number of parties having mooted the possibility of selling the site earlier this year.

St Modwen added that it had made several new acquisitions outside of London totalling £45m and had sold its 50-acre Heartlands Park site in Birmingham for £25m to the government for the HS2 railway scheme.

Since July, St Modwen’s housebuilding arm has begun work on three new sites and is now active on a total of 18 sites, the company reported.

“St. Modwen’s business is focused on creating genuine value from its deep and diverse portfolio of development and investment opportunities. Everything I have seen in my first few weeks in the business suggests that it is well placed to continue doing so.”