Consultant Stace is understood to be favourite for the project management role on a planned £40m fit-out of the Three Snowhill office building in Birmingham, Building can reveal.

Telecoms giant BT is set to move hundreds of its staff into the 17-storey building which is being built by Bam.

BT has said Birmingham is one of its eight ‘key locations’ for the group as it sets about rationalising its property portfolio from a current number of 300 sites to around 30 by 2023. 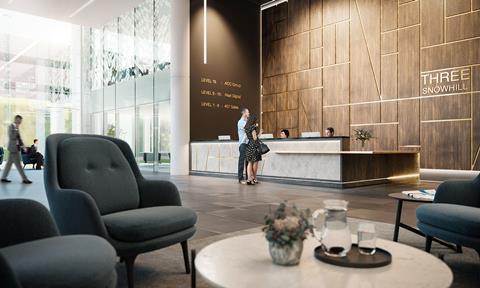 Three Snowhill has been designed by Sidell Gibson

At 420,000 sq ft, Three Snowhill is the largest single office building being built outside London.

Bam is close to completing the £100m job for M&G Real Estate and development partner Ballymore with others working on the scheme including steelwork contractor Severfield, which fabricated and constructed 4,500 tonnes of steelwork, along with QS and project manager Gleeds.

Three Snowhill is the final building to go up in the wider Snowhill development which has been built in the Colmore financial district of Birmingham.

One Snowhill, whose tenants included Barclays Bank, was built by Kier while Two Snowhill was built by Balfour Beatty with current occupiers including HS2’s Birmingham team.

Earlier this year, Stace opened a new office in Birmingham as the firm looks to capitalise on growing workloads in the city and wider Midlands region.

The £18m turnover multi-disciplinary, which is celebrating its 60th anniversary this year, previously had its Midlands base in Leamington Spa but is now based on the city’s Great Charles Street.