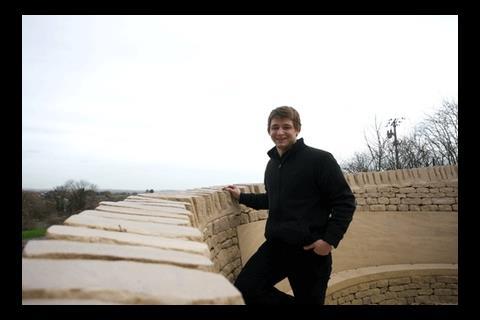 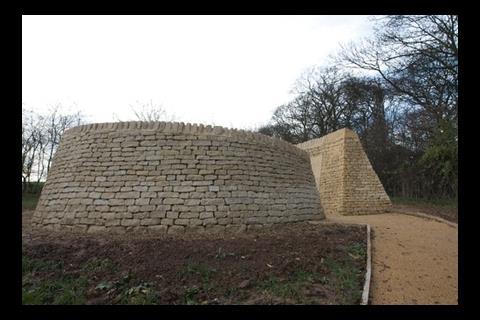 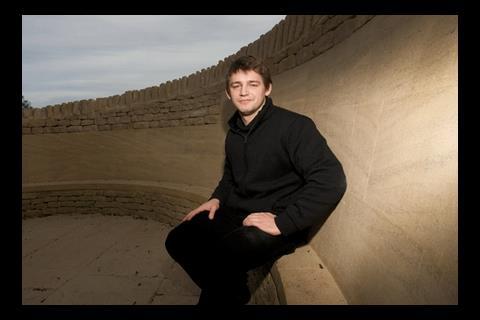 A stone memorial designed by a final year architecture student at Nottingham Trent University has been built for a local Jewish community.

The brainchild of Igor Barteczko, 22, the spiralling stone wall will be used as a place of ceremony and remembrance by the Nottingham Progressive Jewish Congregation.

The circular wall, made from a regional limestone, gradually spirals upwards in height symbolising the cycle of life and death, and is intended to represent the old city wall of Jerusalem.

The design, which mimics the movement of the sun as it goes over the cemetery site, will soon have rows of granite plaques installed on the inside wall to commemorate the dead.

Barteczko said: “The main inspiration for this design was for it to represent life, death and rebirth.

“The project involved me researching the congregation’s religious, ceremonial and traditional practices, along with the site itself, before making proposals.

“I was always realistic with the design in the sense that it could be built and used. I really wanted to make the design work in terms of function and beauty and didn’t want to needlessly waste space or materials just to produce a good initial concept. It feels amazing to see the memorial in place, in a sense it makes me feel fulfilled.”

The architectural design practice 2hD, whose directors Tom and Alina Hughes are senior lecturers in the university’s School of Architecture, Design and the Built Environment, oversaw the project just outside the city.

Working closely with 2hD, Barteczko was involved throughout the design and production process. He also helped with the detailed design of some of the stonework.

NPJC’s brief was for the 30-plus students to devise a suitable memorial to the deceased.

Colin Dean of NPJC said: “The designs produced were of the most extraordinarily high standard.

“They ranged from bronze trees to pillars set in water; from sinuous beech walls to lines of stone plinths in front of trees; and from iron hexagonal columns to steel helixes. The thoughts behind each design, as they related to our religion and culture, were stated by the students and were most impressive.

“We felt that Igor’s design was the most inspirational and practicable though, and it had an air of ancient solidity and permanence which really struck a chord with us.”

The initiative formed part of an architecture module which required students to consider a community project, dealing directly with specific, real-world design issues.

For more about the project and the college visit Nottingham Trent Universitys School of Architecture Design and the Built Environment.
For the latest jobs in architecture in the UK and worldwide, and for career tips visit Building4Jobs.