Larger housebuilders will be required to pay 4% in tax annually on trading profits above £25m, Rishi Sunak has announced.

Sunak announced more detail about the residential property developer tax, which will raise £2bn for building safety remediation works over 10 years, in his budget speech today. 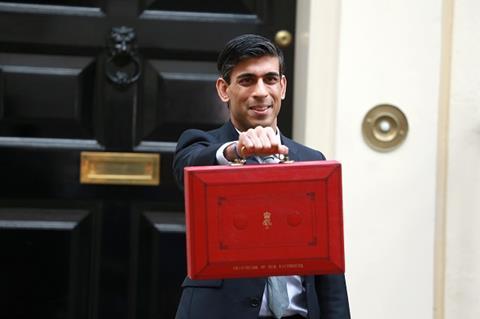 The tax will apply to trading profits on residential property development activity, which will be defined in the Finance Bill, which is currently going through parliament. It will also apply to businesses who have an interest in the land “that forms part of their trading stock”.

The tax level was announced by Sunak as part of a package of housing measures which he termed a “multi-year housing settlement totalling nearly £24bn” (see box).

As previously reported, build to rent activity will be exempt from the tax, while most housing associations, as non-profit organisations, will also be exempt on the grounds. This is because “is possible for taxable trading profits to arise within a group that is not profit-seeking in the wider sense” a government response to a consultation published alongside the budget said.

But the government said that an “exit charge” would be applied if an affordable housing body “benefitting from the exemption ceases to qualify for it”.

It said: “The government recognises that some would have preferred a broader approach which would exempt all registered providers of affordable housing.