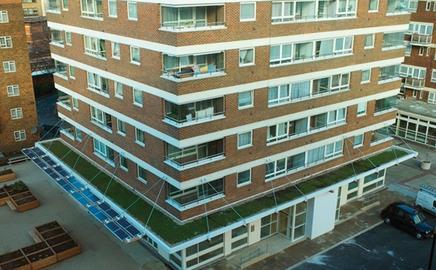 Cole Thompson Anders Architects was the firm behind the modernising and refurbishment of Glastonbury house, a 22-storey residential block in Westminster.

The 162-flat building was completely refitted, with a view to improving its energy efficiency. “The challenge was to fully overhaul a building where, although the fabric was good, services had become tired and outdated," says project architect David Wriglesworth.

As part of this revitalisation, an array of photovoltaic panels has been mounted on a newly installed wind skirt, just below first-floor level on the tower’s south-western elevation.

“Environmental concerns were at the forefront of our approach, and the photovoltaic system fitted into the sustainability strategy for the building.”

Wriglesworth says that, although the optimal performance of the photovoltaics would have been achieved had they been installed at roof level, they wanted them to be visible to publicise the flats’ green credentials; a display in the entrance shows how much energy they contribute.

“They are 4m above ground level so we weren’t unduly worried about them being vandalised,” Wriglesworth adds.

The 2.24kWp system, supplied by Solarcentury, uses Sharp 80W panels that feed into the building's main supply. To date, these have produced 2,021kWh of energy without creating any carbon dioxide emissions. By contrast, 869kg of carbon dioxide emissions would have been created if the energy had been generating from conventional sources.

Every year, the photovoltaic system is expected to produce 1,600kWh of low carbon electrical energy for the residents of Glastonbury House.