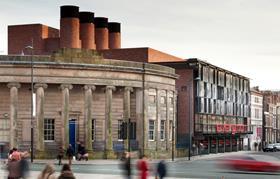 The news was announced at tonight’s awards ceremony which is being held at the RIBA’s headquarters at Portland Place in London.

The firm beat five others to the prize - the Shard by Renzo Piano Building Workshop, the Saw Swee Hock Student Centre for the London School of Economics by O’Donnell & Tuomey, the London Aquatics Centre by Zaha Hadid Architects, the Library of Birmingham by Mecanoo and the Manchester School of Art by Feilden Clegg Bradley Studios.

Riba described the Everyman as “a new building with a striking exterior and elegant interior,all with exceptional attention to detail and sustainability credentials.” The original Everyman Theatre opened in 1964 in a nineteenth century chapel on one of Liverpool’s main streets, but after falling into disrepair, Haworth Tompkins were engaged in what became a nine-year project to pull the theatre down and replace it with a new one. The architects were tasked with ensuring that the soul of the old Everyman, one of informality and community ownership – the ‘theatre of the people’-  was carried into the new building.

Steve Tompkins of Haworth Tompkins said winning the Stirling Prize was an “enormous honour” for the firm’s project team and our clients. He said it was “the reward for an intensive collaboration over almost a decade, during which we have grown to love the Everyman and the great city that it serves.

“It is also an encouragement to carry on working the way we do, despite the pressures all of us are under to speed up and dumb down. We couldn’t be more delighted.”

RIBA president Stephen Hodder, describing the building as “exceptional”, said its success lay in the architect’s close involvement with the local community throughout the project. He said: “Haworth Tompkins has struck the perfect balance between continuity and change to win the hearts and minds of the people of Liverpool with the vibrant new Everyman. Complementing beautifully with the surrounding listed buildings, it is a ground-breaking example of how to build a daring, bold and highly sustainable large public building in a historic city centre.”

The project was the third favourite of the bookies at odds of 9/2, behind the Saw Swee Hock Student Centre and the London Aquatics Centre. The judging panel for this year’s prize was chaired by Foster & Partners’ joint head of design Spencer de Grey and comprised MJ Long from Long & Kentish Architects, Cindy Walters at Walters & Cohen, the founder of US embassy architect Kieran Timberlake, Stephen Kieran, and businessman and arts benefactor Tim Sainsbury.

Other winners on the night included Denizen Works for House No 7, Isle of Tiree, which picked up the Stephen Lawrence Prize. Manchester Metropolitan University was named RIBA Client of the Year, and the RIBA Manser Medal was won by Loyn & Co for Stormy Castle.