Tech firms are now the biggest customers of upcoming office space in London, with their needs having outstripped those of the previously dominant financial services industry.

The latest Deloitte London crane survey shows that demand for high-quality space from tech, media and telecoms firms – the so-called TMT group – has shot up as start-ups refuse to settle for second-best premises.

TMT firms accounted for 28% of pre-leasing activity – the highest of any sector, and up from 21% in the last survey six months ago.

But demand from financial services firms has nosedived from 46% last summer to just 24%.

Deloitte’s report said: “The tech sector sees space as a key element of its brand, positioning and talent offer. Flexible co‑working space providers are enabling start‑ups to emulate […] the tech [firms], rather than settling for secondary space, as they previously would have.”

The survey said corporate tenants, including serviced office providers, were also hungry for more space and added: “This dwarfed activity from the more traditional sectors such as the professional, legal and insurance industries. The continuous rise in demand from corporate tenants in the recent years has been primarily driven by the rapid expansion of co‑working space providers.” 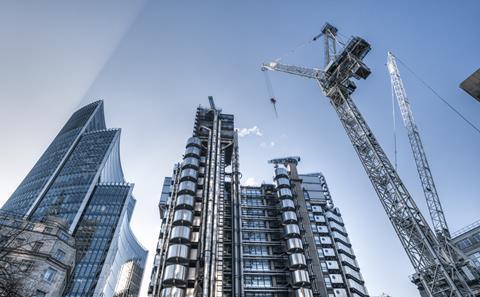 Office completions in the capital hit a 14 year high

Deloitte’s report also said employers were realising that attractive places to work were key to keeping staff – and that smaller firms were turning their backs on secondhand space now serviced office providers were providing better-quality alternatives.

It said: “The shift towards securing the best-quality office space and workspace environment in order to attract and retain staff is becoming ever more important. Occupiers are less cost focused when selecting property as poorer secondhand quality office accommodation is likely to hinder recruitment and affect the business.”

The survey showed 11.8 million ft2 of office space under construction in central London. This is a 13% fall on the last survey, six months ago, because of a completion rate at a 14-year high. However, the figure is still above the long-term average of 10.5 million ft2.