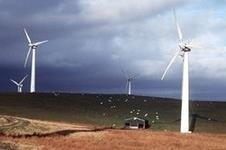 Plans to build the world’s largest offshore wind farm in the Thames Estuary will go ahead, the developers announced today, following months of speculation over the future of the project.

Energy giant E.ON, and its partners Dong Energy and Masdar, said they were “satisfied” the London Array was financially viable following the boost in government support for offshore wind in last month’s budget.

The consortium said it would invest almost £2bn (€2.2bn) in the first 630MW stage of the scheme, which could start producing power by 2012. Eventually, the project aims to supply enough power for around 750,000 homes.

Onshore work is due to start in the summer, with offshore work expected to begin in early 2011.

E.ON chief executive Wulf Bernotat said: “Today's announcement is proof that, if all interested parties work together, renewable power can be taken to its next level and so make a real difference to the fight against climate change.”

Welcoming the announcement, Gordon Brown said: "The London Array is a flagship project in our drive to cut emissions by 80% by 2050 and meet future energy needs. The UK is a world leader in offshore wind farms, creating jobs and prosperity for the economy. That's why we have increased our support for this technology as we move towards a low-carbon future.

“E.ON, DONG Energy and Masdar are to be congratulated for their work on the London Array.”