Thameslink's £3.6bn upgrade back on budget 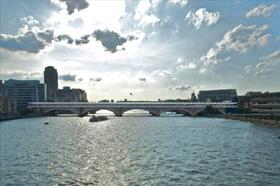 Network Rail has successfully brought the ballooning costs of phase two of its £3.55bn Thameslink upgrade programme back within budget, a report by the public spending watchdog has concluded.

The National Audit Office report found that Network Rail has managed to bring the forecast cost of phase two of the Thameslink programme back within the original overall budget, after forecast overspends had peaked at £527m over the original budget of £1.7bn.

The ballooning costs were identified in 2009 when Network Rail established that it could not deliver the original design for the second phase of infrastructure within the planned time frame or budget because these works were more complicated than anticipated and posed significant delivery challenges.

However, the NAO said Network Rail had since worked closely with industry, including appointing consultant EC Harris, to bring down the costs of the phase two plans, including simplifying plans for the London Bridge station, which reduced the cost by £216m.

The report added that while the London Bridge station upgrade “remains significantly more expensive than originally anticipated in 2007” this would be offset by savings found in other parts of the programme.

The report said the Department for Transport had agreed a new revised plan for phase two with Network Rail in December 2012, with the overall budget for phase two now set at £1.8bn after a £143m underspend on phase one was carried over, meaning the programme now remains within the total budget of £3.55bn agreed in February 2008.

The report said despite cost pressures, including an extra £158m for Blackfriars station in part because Blackfriars Bridge was in worse condition than Network Rail expected, the first phase of the programme was completed £143m under the £1.85bn budget.

It said Network Rail offset cost increases at Blackfriars and Farringdon stations with savings made elsewhere in the programme, including changes to the track and signalling works, reduced programme management costs, and the reallocation of part of the budget for compensation as there was less disruption to train services than had been anticipated at the design stage.

The report said Network Rail was able to transfer the £143m underspend to the budget for phase two of the programme.

Amyas Morse, head of the National Audit Office, said: “It’s too early in the Thameslink programme to conclude on whether or not it will achieve value for money. That will have to wait until the new service is running. However, there has been good progress in delivering the first stage of the infrastructure part of the programme on time and under budget, which the department now needs to build on.”