The windmill makes a comeback on the Sussex coast 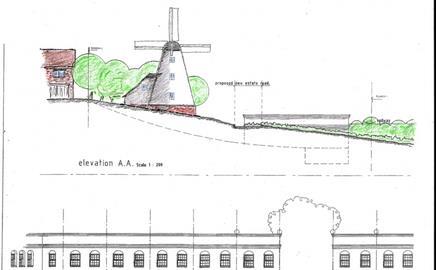 Seaford scheme include a 16-metre sail model windmill which will provide power for 15 homes. Developer vows to take on the Nimbies

A Sussex developer is planning to build a traditional windmill to power homes with electricity.

The structure, known as a smock mill after the old agricultural garb it resembles, would stand 14 metres high and have sails eight metres long. The mill, to be situated in Seaford on the coast, would provide enough power to supply 12-15 homes with electricity and house three apartment units inside.

Alan Edgar, designer and planner for developer, John Rigden, said he based the viability of the scheme on a report from Loughborough University’s Centre for Renewable Energy Systems Technology (CREST) which looked into the output of similar mills on the Norfolk Broads.

Windpower is nothing new in Sussex. Hundreds of windmills dotted the county before the onset of steam power in the nineteenth century. Edgar says the area has sufficient wind speeds to keep the sails turning. “There were 200 windmills between Brighton and Eastbourne. That’s not an accident.” He says that the efficacy of the machines can be improved with a bit of boatbuilding technology.

The scheme is awaiing feedback from the district council. Levels of local objection to any scheme in this area are high – it's a local beauty spot known as the Dip - but Edgar hopes the addition of the windmill and the inclusion of a wildlife park will swing the planners. “We can’t let the Ninmbies win this one,” Edgar said. Lewes District Council approved another plan to convert a windmill in Kingston, on the South Downs, to power generation in December last year.

The scheme will include solar panels and built-in composting units. He estimates the development, wildlife park included, will come in at £1.75m .

Meanwhile, the Grade II-listed, 19th Century Argos Hill Windmill, in Mayfield, East Sussex, has been allowed to fall into disrepair by owner Wealden District Council. The local council recently voted to save it from being 'put into storage' and a petition to save it is seeking help both signatures and financial.

What goes around - windmill basics

- It is thought that windmills were brought back from The Crusades. Certainly the earliest ones appear in the 12th Century.
- Windmill technology took 500 years to perfect. Incrementally, designers introduced all features required by an efficient modern wind turbine, including 1) camber along the leading edge, 2) placement of the blade spar at the quarter chord position (25% of the way back from the leading edge toward the trailing edge), 3) centre of gravity at the same 1/4 chord position, and 4) nonlinear twist of the blade from root to tip.(Drees, 1977)
- Applications were diverse, ranging from the common waterwell, irrigation, or drainage pumping using a scoop wheel (single or tandem), grain-grinding (again, using single or multiple stones), saw-milling of timber, and the processing of other commodities such as spices, cocoa, paints and dyes, and tobacco.
- One of the few Sussex windmills left, Jill windmill at Clayton, near Burgess Hill, nearly burnt to the ground when the 1987 hurricane sent its sails round despite the brakes being on. It was saved by the intervention of owner Simon Potter crawling up the hill on hands and knees in 120mph winds.