Three firms are on the march to build a £60m office block at a site once used as General Eisenhower’s Allied headquarters during the Second World War.

Norfolk House in Westminster was first built in 1722 but was demolished in 1938 with a new building put in its place the year after.

During the Second World War, US general Eisenhower set up a headquarters building at the site for the Allied Expeditionary Force.

The building was turned back into offices after the end of the conflict and was extended in the 1970s under a design by TP Bennett. It underwent extensive refurbishment the following decade.

But the office is not deemed up to scratch for modern requirements and proposals by Make, which unveiled three years ago and approved by Westminster planners in 2017, will see the current neo-Georgian building demolished.

Building understands ISG, Skanska and McLaren are in the hunt for the work which will see the office building at 31 St James’s Square and 30 Charles II Street redeveloped.

Sir Robert McAlpine is understood to have been negotiating with the client Sateria Investments but was unable to agree terms.

The successful bidder will be responsible for the demolition of existing building and the reconstruction of 31 St James Square and 30 Charles II Street’s facades as part of the construction of a new office block.

The building is not listed but does lie within the St James’s Conservation Area. Make’s scheme will rebuild the facades resuing the existing stone. 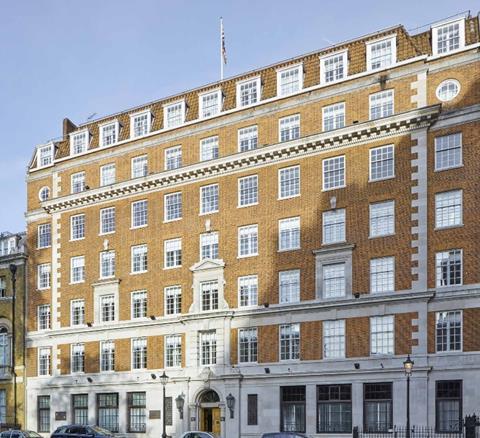 How the building looks now