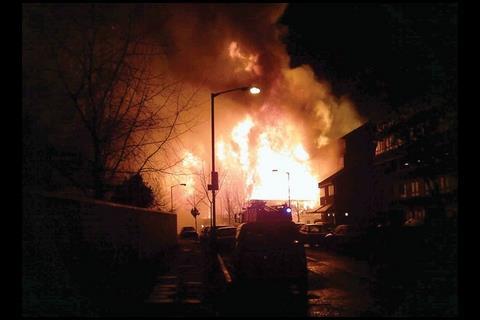 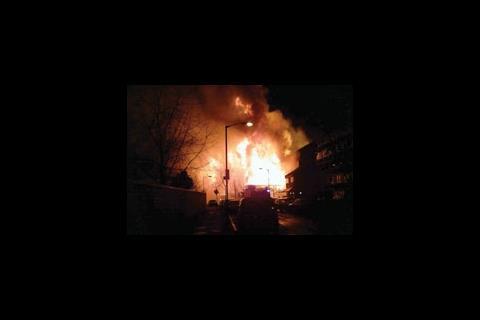 After Peckham blaze, fire chiefs accuse specialists and HSE of failing to police safety on sites

Fire safety chiefs are demanding the Health and Safety Executive increase its policing of building sites that use large timber frames in the wake of last week’s blaze in Peckham, south London.

The fire (pictured) destroyed a partially completed multistorey development of timber-framed affordable homes and badly damaged two adjacent blocks of flats. About 150 fire fighters attended and 310 people were evacuated from their homes.

Jonathan O’Neill, managing director of fire safety body the Fire Protection Association (FPA), called on the government to put more pressure on the HSE to take a stronger role. He said: “Ministers must act now before such fires not only ruin homes and possessions but also cause serious injury or death.”

The industry has failed to self-police fire safety on timber frame sites despite several devastating fires in the past three years. Fire safety specialist International Fire Consultants (IFC) has offered a third-party accreditation scheme for fire safety since 2007 but said it had only done one job.

Peter Jackman, IFC chairman, said the timber frame industry was in “total denial” over the risks of fire. He said, “I can’t understand it. It’s almost if they have a death wish. As a body they seem to be shying away from the issue.”

In a statement, the HSE said timber frame sites were already an inspection priority and there was plenty of guidance which it had helped the industry to develop. It said lessons from the Peckham fire would feed into this.

The UK Timber Frame Association (UKTFA), which offers a fire safety inspection scheme, said the problem was getting the main contractor to assume responsibility for safety once the timber frame contractor had left the job.

Geoff Arnold, UKTFA chairman, said: “We have a duty to explain to main contractors the risk and measures that need to be put in place on schemes using timber frame construction, but ultimately the responsibility falls with them to implement it.”

It is understood the timber frame contractor at Peckham had finished its work before the fire broke out.

Arnold said the UKTFA would implement a new fire safety code by 31 January next year which would be a condition of membership. Called Site Mark, the scheme aims to ensure the risks associated with timber frame projects over four storeys or 2,500m2 are fully taken on board by contractors.

The Association of British Insurers is so concerned about the increasing cost of fire claims worth over £500,000 that it has commissioned an investigation. It said commercial claims for fires in buildings had risen by 16% in 2008 and was at its highest level for 20 years.