Treasury gears up to save £3bn a year on infrastructure

Road, rail and flood defence projects are being lined up to test government plans to slash 15% from the cost of civil engineering schemes over the next five years.

A list of projects has been drawn up that will be used to implement the findings of a report, published late last year, into the cost of UK civils projects.

These include introducing a more collaborative approach to procurement, reviewing specification, and guaranteeing longer and more stable pipelines of work.

The planned high-speed rail line linking London and Birmingham (High Speed Two), and flood defence work would also be used to trial the methods, he said.

A Treasury source said: “We have a list of projects, it’s just not one we’re willing to go public on yet.”

The trial list follows publication of the report for Infrastructure UK, produced by Terry Hill of Arup, which said that £3bn of savings in the UK’s infrastructure building programme could be found each year.

These findings have been backed by ministers, but Infrastructure UK has so far failed to get full agreement across government to publish the implementation plan, which it drew up alongside the research.

This will be refined and agreed over the next three months, before being published in the March Budget. 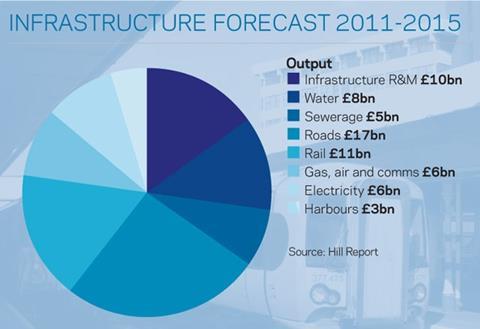 The Arup report found that costs in some areas - for example, the construction of major new rail stations - were up to 50% more expensive in the UK than in near European neighbours.

The methodology has already been used to make theoretical savings of up to £800m from the estimated cost of High Speed Two.

Report author Hill said the savings could be ploughed into more infrastructure work.

He said: “We’ve identified an annual saving of £3bn a year. You can imagine the projects that are canned or deferred that this could then allow to go ahead.

“That is the prize, if in the current tight fiscal environment those savings can be released to fund other projects.”

Cutting costs through efficiency? Count us in

”As this study rightly points out, addressing the factors that can drive down the cost of major infrastructure projects could save the government and investors billions of pounds - or, more can be built with the same level of funding, benefiting society as a whole.

“The truth is that the industry is very much on board because it sees lots of inefficiency. Much of it is in the upfront areas, in dealing with clients and procurement. Ordinary companies can start by being much clearer about what they are specifying, and they can look at ways of encouraging innovation in their projects.

“This is not about reducing margins, which are already very tight. This is about making construction more efficient. Look at some of our major projects and how long they take in gestation. It’s about the government as well as the industry - eliminating the peaks and troughs in building, and streamlining the procurement process, where the costs are enormous.”