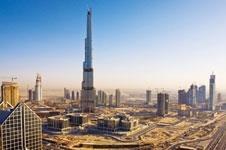 The Trump International Hotel & Towers in Chicago has moved up the world’s tallest building rankings following changes to the rules on how tall buildings are measured.

The Council on Tall Buildings and Urban Habitat, the international body that arbitrates on tall building height, has changed its height criteria to reflect the recent developments with several super-tall buildings.

The change will impact on both the height of tall buildings and their relative international height rankings.

It means that the Trump building has gained 27 ft and will surpass the Jin Mao Tower in Shanghai to occupy the rank of sixth tallest on the current list of completed buildings.

The new criteria now states that it must be the “height measured from the level of the lowest, significant, open-air, pedestrian entrance”. This is to allow for the increasing numbers of multi-use tall buildings which often have several different entrances at different levels, whilst also accommodating buildings constructed in non-traditional urban or suburban locations.

The previous description required the height to be measured from the pavement outside the main entrance.

Peter Weismantle, chair of the CTBUH height committee and director of supertall building technology at Adrian Smith + Gordon Gill Architecture, said: “As one might guess, with the committee being made up of architects, engineers, contractors, developers, building owners and academics, a variety of opinions and views were expressed.

"The resulting revisions almost two years later reflect a general consensus of the committee in recognising the most recent trends in tall building development around the world.”

The committee has also decided to discard its previous “Height to Roof” category as the increasingly elaborate building forms, which include spires, parapets and other features means it is becoming difficult to determine what constitutes the roof.

..and not forgetting the Burj Dubai, which should reach beyond 800m when it is completed in 2010