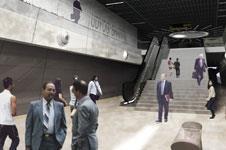 Two people have been killed after a crane collapsed during the construction of the Delhi metro in India.

A crane lifting concrete slabs for a bridge collapsed, causing the partly built bridge to fall onto a public road and trap passengers inside a bus.

A construction worker and a bus driver were killed outright, while 11 others were seriously injured.

A spokesperson for the Delhi Metro Rail Corporation blamed the accident on “metal fatigue” in the crane, and said the accident would be investigated.