The review, conducted by Terry Hill, a former chairman of Arup, says a complete rethink of how civils projects are procured, regulated and delivered is needed to bring down their costs.
The Hill review’s interim findings were published this week, alongside the UK’s first National Infrastructure Plan.

A fragmented supply chain, an overly contractual approach from builders and engineers and the lack of data on the condition of UK infrastructure assets were adding to the problem.
The review found that the UK has the fourth highest civil engineering costs in the EU, more than 60% above Germany, which despite being a wealthy economy has infrastructure costs close to the European average.

The price of civils projects in the UK is more than three times that in Bulgaria, the lowest priced economy in Europe, and twice as expensive as Italy.

Recommendations on what to do about the problem will be made in the final report by the end of the year, but the interim review identifies 19 possible areas of action, including reviewing regulations, revamping procurement and earlier contractor involvement. 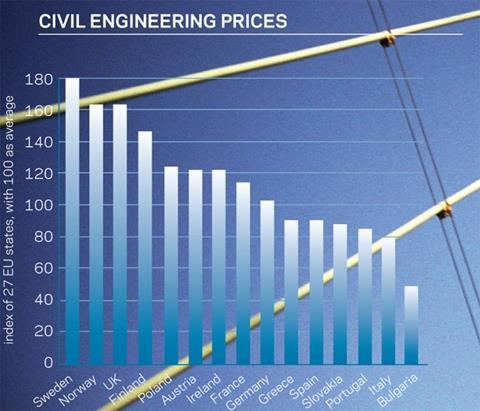 Paul Skinner, a former Rio Tinto boss and chair of Infrastructure UK, the body that commissioned the report, said: “I know from my private sector experience that when you totally rethink processes you can drive a significant amount out of costs. Ten per cent reductions aren’t unusual. We’re in a situation where 1% makes a big difference, but 5% is transformational.”

In a speech to the CBI on Monday, prime minister David Cameron launched the National Infrastructure Plan, which is focused on bringing more private funding into the construction of infrastructure that supports economic growth.

The plan confirmed funding for transport, energy and waste projects, and said it was possible to get £200bn invested in infrastructure in the next five years, 80% of it from the
private sector, compared with £150bn invested in the past five years.

The government will look at whether to extend economic regulation to the transport and waste sectors to reduce risk for private investors. A report on this is due in spring next year.

The government will complete the design and testing of the proposed £1bn Green Investment Bank by spring. The bank will take on the early, riskiest construction phases of complex infrastructure projects.

Meanwhile, fears are growing over the £5.5bn Thameslink upgrade programme after it was not confirmed in the spending review or Tuesday’s Department for Transport announcement.
Crossrail and the London Underground upgrades have been given the go-ahead, but the department said an announcement on Thameslink had not been made because the trains for the scheme were interdependent with those on the Intercity Express Programme.

New government PFI schemes are in for a hiatus following last week’s Comprehensive Spending Review, which removed incentives for the procurement method.

Chancellor George Osborne abolished the system of PFI credits, administered by the communities department; these allowed councils to get guaranteed revenue funding for schemes, which helped to underwrite them.

Osborne said he wanted to “remove perverse incentives for projects to be delivered through PFI”. PFI consultants said the move could create a hiatus.

The Treasury is to set out plans for a “son of PFI” system in the first two weeks of November, the government said this week. James Stewart, chief executive of Infrastructure UK, said the move didn’t mean the end of PFI.

“I expect other methods of procurement to appear. Everyone is still absorbing the consequences of the spending review,” he said.