The UK’s first “Jump lift” has been installed in the Shard under construction at London Bridge.

Developed by Kone, the self-climbing elevator system provides an alternative to exterior hoists and should improve the efficiency and safety of the building’s construction.

The lift uses the building’s permanent lift shaft during the construction phase and moves higher or “jumps” in the shaft as the building gets taller. It allows shaft construction and lift installations to continue at the higher levels while the lift is operating in the same shaft at the lower levels below a protection deck.

The approach enables the lift shafts to be used to aid construction at the same time as they are fitted out with permanent cars and put into service as construction progresses.

Tony Palgrave, construction director for Mace on the Shard, said: “This solution is fundamental to our strategy of transporting people and materials quickly and efficiently to the top of the building and down again in the safest possible way.”

The first lift has capacity of 1,600kg and will mainly be used at the Shard for site workers to get up and down the structure. It will initially serve up to level 12 but will eventually extend to level 26.

In total there will be five jump lifts, the largest of which will be equipped to transport 3,500kg of people and materials, serving up to level 34. The highest of the jump lifts will go up to level 66.

Kone is supplying and installing a total of 10 escalators and 36 lifts at the Shard, 13 of these double deck lifts including the five jump lifts. 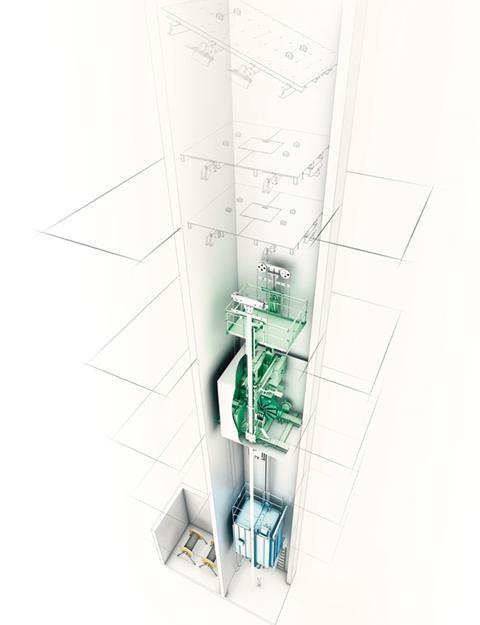