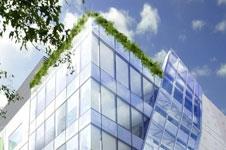 Construction has begun on the first phase of a new two-part development at Great Ormond Street Hospital (GOSH) in central London. The £300m Mittal Children's Medical Centre at aims to be the UK's greenest healthcare building.

The building is expected to offset more than 20,000 tonnes of carbon dioxide a year. It will generate all its own energy and supply green energy to other parts of the site. It will do this by using energy-saving technologies such as two combined cooling, heat and power units, which will initially run on natural gas, but could switch to biofuels later. It is estimated this will reduce its carbon by 60%, which could climb to 120% if biofuels from sustainable resources are used. A decision on whether to use biofuels will be made at a later date.

Natural daylight, presence detectors and LED lighting will also help to reduce energy consumption. A glazed natural ventilation flue will extend the full height of the building, naturally ventilating the restaurant on the ground floor. The bedrooms also use mixed mode natural ventilation.

Bill McGill, GOSH director of redevelopment, says: "We believe this is as green as it is possible to get for a central London building. We have faced up to the challenges of the hospital's location, got through stringent planning procedures and will be ready to start building this spring.

“The redevelopment design is being used as an example to other developers and our energy assessment is being used by the Greater London Authority as a guide to best practice in London, something we're very proud to achieve.”