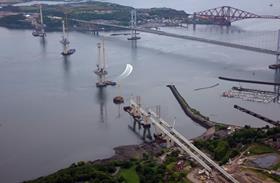 Scotland’s new £1.4bn Firth of Forth brigde has become the UK’s tallest bridge as construction workers on site hits 1,200.

The Queensferry Crossing’s three towers have reached 160 metres in height as construction continues on the new crossing over the Firth of Forth near Edinburgh.

When complete the Queensferry Crossing towers will be 207 metres tall. Until now the record for the tallest bridge in the UK was held jointly by the Forth Road Bridge and the Humber Bridge which have 156 metre towers.

Visiting the site infrastructure secretary Keith Brown said: ““Work is underway on every front across this vast project and workforce numbers are at a peak. Direct employment on this large scale infrastructure project is bringing significant benefits to the to the Scottish economy with over 1,200 people employed on site and 75 per cent having a home address in Scotland.

“Significant opportunities continue to be created for Scottish businesses through the wider supply chain. To date Scottish firms have been awarded subcontracts and supply orders from the project with a total value £246 million out of a total of £549 million.

“It’s great credit to the hard work and dedication of the men and women working on the Queensferry Crossing to see the progress they have made since my last visit. This is despite the challenging conditions they often face, particularly in the middle of the Forth estuary, even during the summer.

“Work is under way on every front across this vast project and workforce numbers are at a peak.”

The new crossing was ordered by ministers after corrosion was found on the main suspension cable of the Forth Road Bridge which called into question its life expectancy.

When the Queensferry Crossing opens it will take over the bulk of the traffic over the Firth of Forth, with the older bridge reserved for buses and taxi’s. The new crossing will be completed in December 2016.