US fund manager plans thousands of homes for Birmingham

Plans for thousands of new homes at two sites in Birmingham have been unveiled in the past 24 hours.

St Modwen, which was bought by US fund manager Blackstone for £1.3bn over the summer, wants to build another 1,300 homes at the Longbridge site – the former Rover car plant the firm took over nearly 15 years ago. 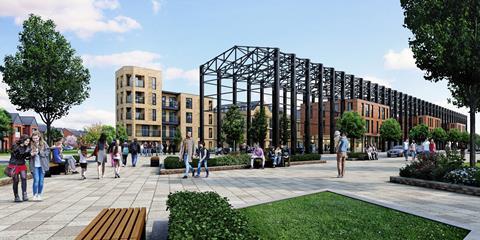 Steelworks from the original car manufacturing building are being retained and repurposed to create work space, alongside community areas and new homes

It has already built 1,450 homes at the site as well as offices, a new town centre and park, Bournville College, and facilities such as the Royal Centre for Defence Medicine.

The latest proposals will see the former MG Rover factory floor site feature a mix of new homes, green space with industrial buildings kept such as the car assembly plant.

The plans, which are expected to be ruled on next spring, will also include 90,000 sq m of commercial space. 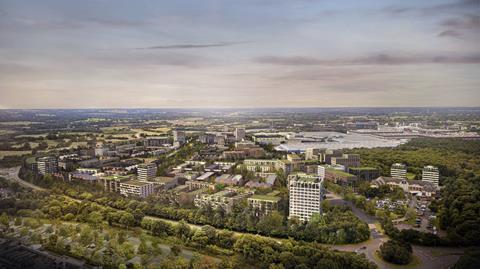 Meanwhile, local practice Glenn Howells Architects is masterplanning a scheme at the NEC exhibition venue, also owned by Blackstone, on the other side of the city that will also see thousands of new homes go up.

Work will involve turning 27ha of surface level car parking space and surplus land into a mixed-use scheme at the venue.

Plans include 5,000 homes as well as a hotel, restaurant and café, primary school and 35,000 sq m of commercial space.

The planned scheme will be next door to the planned Interchange station for HS2.

Skanska, Laing O’Rourke and a Sir Robert McAlpine team are all bidding the £370m job.