US plays down Trump threat to economy 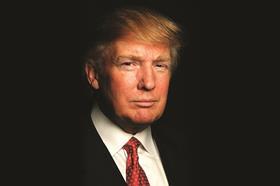 New York construction professionals have sought to play down concerns of an immediate negative impact on the US economy from the election of Donald Trump as the country’s next president.

As protests against Trump’s (pictured) victory continued to grip major cities across the US, including New York, as Building went to press, New Yorkers working in construction said their sector at least was unlikely to feel a Trump effect for years to come.

Trump’s $1tn “America’s Infrastructure First” spending plan got a cautious welcome, but concerns were raised about his protectionist economic and hardline immigration policies.

Adnan Malik, a British director who has worked for consultant Gleeds in New York for 14 years, said: “We’re not going to see any of the impact of his policies until 2018 at the earliest. They have to go through the House and the Senate and won’t impact until much later.

“The Republicans may hold the Senate, but only with a slight margin [of eight over the Democrats]. And then there’s filibustering [where opponents can defeat legislation by talking it out]”.

He added: “People may get concerned and may panic and that may impact, but as we saw with the US stock market – which crashed the morning after the election but has hit all-time highs since – people can overreact and then there can be a correction.”

Malik’s US colleague, Dana Martinez, Gleeds vice-president in New York, welcomed Trump’s $1tn infrastructure spending plan, saying investment in roads, railways and airports was “badly needed”. But he raised concerns about other Trump policies, including the prospect of tariffs being slapped on imports. He said: “Cheap steel from China is causing US steel mills to go under - but if tariffs come in, that could potentially stop construction work. If raw steel costs around $500 a tonne now and that goes up 50% over night it could have a drastic impact on construction.”

Commenting on Trump’s planned immigration crackdown, Martinez said he believed it would focus on illegal rather than legal immigration, but this could affect Southern states “where there are a lot more undocumented workers and it could have a big impact”.

A New York construction professional at a different firm, who preferred to remain anonymous as the company counts property conglomerate the Trump Organisation as a client, argued he knew first hand that Trump (pictured) could be effective.

“I’ve worked with Donald on many projects,” the source said. “He knows his stuff professionally, from the technical to the financial end. He’s a very smart guy. He wouldn’t be able to develop what he did if he wasn’t a winner.

“I don’t think he is evil. Sure he’s not a perfect person. He’s driven to win. But in New York development circles nobody critiques him on a professional level.”

What impact a Trump victory has on UK firms remains to be seen, although top of any worries is access to the market ahead of any Trump protectionism plans.

Before his election, Ann Bentley, global chairman of Rider Levett Bucknall said accessing the US job market is hard for overseas professionals: “There are already quite significant trade barriers with the US. They protect their markets far more than we do.”

But some significant consultants remain such as Gleeds and Atkins while architects working out there include Foster & Partners and Heatherwick Studio.