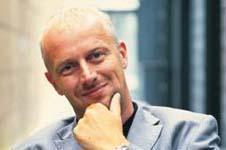 Urban Splash has reported “humbling” results for 2009 that halved the value of the company.

The developer, which rose to prominence on the back of the regeneration boom of the past 10 years, reported a loss of £38.3m on turnover of £49.9m, down a third from 2008. The loss was largely caused by an exceptional cost of £31m, including a £26.1m writedown on land and “gross project margins”.

Tom Bloxham, chairman of Urban Splash (pictured), said the past year had been a battle for survival. “It gives me no pleasure to report losses wiping nearly half of our net asset value. These figures are humbling and have taught us all some lessons … This has been the hardest year of my business life.”

He said the survival of the company was owing to “the pragmatic support of our principal banker, HSBC”. Urban Splash secured a five-year, £125m banking facility in August 2008 from a basket of lenders, but then arranged another £101.2m facility from HSBC in October 2009. The re-financing cost the firm £1.7m in fees. It remains in discussions with RBS and Co-op banks over other loan facilities.

However, Bloxham, said the current year was looking better for the company.

Urban Splash announced several rounds of redundancies beginning in the middle of 2008, which saw it lose at least 60 of its 280 staff.

It has drastically scaled back new development, and is concentrating instead on renting homes that have been difficult to sell. It has doubled its rental income to almost £3m.