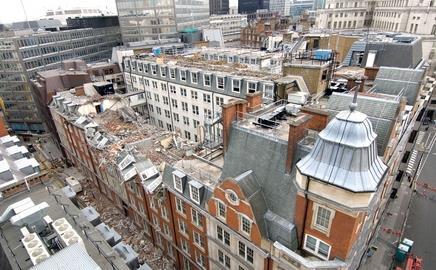 The structural damage resulting from last week’s building collapse in Victoria, central London, may spread to neighbouring buildings, turning it into a much bigger problem than first anticipated.

The incident occurred at the Queen Anne Business Centre on Dean Farrer street. Council approval had not been sought for construction-related work.

The source said: “There was lots of unauthorised work going on. They had taken out internal walls and supports. The developers were horrified. The whole thing was a death trap waiting to happen.”

The HSE is still investigating but it has issued prohibition notices to the building’s owners, two individuals trading as the Splendid Hotel group. The notices prevent work from being carried out on any of the group’s other properties, including 14 hotels in London and one in Manchester.

A spokesman for the Splendid Hotel Group said: “We can confirm that clearance and small works of restoration were going on in the building [at the time of collapse]. We can confirm that a prohibition notice has been served by the HSE and we are appealing the order on the basis that it is unreasonable and excessive.”

The area remains unsafe, with several neighbouring buildings at risk. The specialist works arm of demolition contractor Keltbray has been carrying out work to make them safe. Paul Ford, the managing director, said it was “very dangerous”, and a “huge” job.

The developers were horrified. The whole thing was a death trap

Source close to the inquiry

Ford said the terrace of buildings behind Dean Farrer street, and a second row behind that, were linked to the collapsed building. They were also being worked on at the time of the collapse and are now unsafe.

Ford said: “The fear is that the reverberation from the controlled collapse could start a further collapse of those other buildings so that is why we’re having to prop all these buildings.” He added the work would take at least four weeks.

For more on the incident go to www.building.co.uk/archive