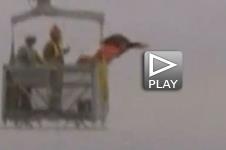 Following its opening last week the world’s tallest building, the Burj Khalifa, has played host to two base jumpers who have set a new world record for the highest jump.

The daredevils fell 828m from the Burj’s summit, opening their parachutes at the last minute to ensure a safe landing.

Base jumping from buildings is usually illegal because it is often done covertly and involves trespassing, but the parachutists in this case got special permission from the building owners to perform the leap.

During construction two other base jumpers had trespassed onto the site at night and performed jumps, but their records have been eclipsed now the Burj has been completed.