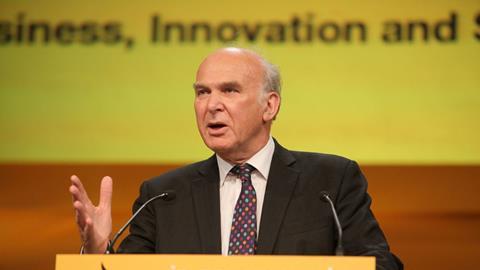 Business secretary Vince Cable has pledged to look into the UK’s official travel advice following complaints that it is hampering firms trying to win work in Libya.

Earlier this month Graham Hand, the chief executive of British Expertise - an organisation representing a host of construction and architecture firms seeking international work - told Building that the Foreign and Commonwealth Offices’ unequivocal advice not to travel there was a product of the “nanny state” designed to protect “the most gormless tourist”.

Hand added that other European countries already had oil and construction firms in Libya striking deals.

Speaking at a fringe event last night on overseas trade organised by the Financial Times and the City of London, Cable said he was unaware of such complaints but said he would “undertake to find out” more.

“We are talking about travel advice not travel compulsion,” he said. “If tough people from the oil industry want to go there and risk their lives that is up to them.”

Cable added that there was a need for caution because fighting was still taking place in the country and that people would not forgive the FCO if it advised travellers to go to Libya and then saw them killed or captured.”

The business secretary also spoke of his frustration that smaller firms in the UK have limited access to work abroad.

“In Germany, two thirds of SMEs have some form of involvement with overseas trade,”he said. “Here it is only one third although we pride ourselves on being an open economy.”