Viñoly arts centre £3m over budget and one year late 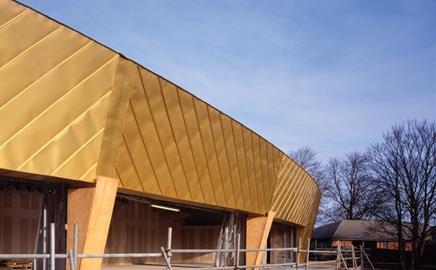 One of superstar architect Rafael Viñoly’s first UK projects is nearly £3m over budget and likely to be completed a year late after cladding and glazing specialists withdrew from the scheme.

Work has virtually stopped on the Visual Arts Facility in Colchester, being built by Banner Holdings, after subcontractors Richardson Roofing and Eiffel pulled out because of technical problems and trouble getting paid.

As the building is not watertight, work has largely ground to a halt on the interior.

The job went £1.3m over budget last year when costs rose from £16.5m to £17.8m because of a delayed start and costs incurred in strengthening the roof after it dipped more than anticipated.

Client Colchester council recently said the building would cost £1.5m more to finish. It is believed this could rise further.

The cause of the overruns centres on the cladding and roofing. It has emerged that Richardson Roofing, the specialist responsible for the gold-coloured roof and wall cladding, retired at the end of last year when it reached the £2.1m limit set out in its letter of intent, a pre-contract agreement that specifies the value of the work rather than what exactly has to be done. Areas of the roof and walls are unfinished.

It is understood that the council is liable for the extra cost because the contractor, Banner Holdings, has also been working to a letter of intent rather than a formal contract. Martin Hunt, the recently appointed deputy leader of the council, said: “There was never a contract that said it would be built for ‘X’. This is something we will investigate.”

George Richardson, director of the roofing firm, said deflections in the roof made it “impossible” to match up the standing seams where these met the walls. He added it would cost another £700,000 to finish the job.

Glazing specialist Eiffel left the job last year after deflections meant it could not fit the roof glazing. A second firm was appointed but went bust.

The council and Banner Holdings are locked in negotiations over how to finish the project. Neither would comment on the likely cost or timescale of the work.

John Drew, principle at Rafael Viñoly Architects in the UK, said: “It’s a complicated building. Wrapping something straight around something curved is obviously difficult.”

viÑoly’s struggle to build in the uk

Theatre with sliding internal walls. Handover was meant to be at the end of last year but is now delayed until this August.

The enormous 300m-high translucent funnel towering over a much-loved London landmark drew gasps of horror from the architectural community when it was unveiled last month. Planning permission and funding remain in question.