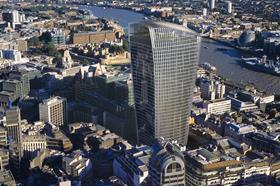 Fixing London’s Walkie Talkie tower to ensure it does not reflect extreme heat from the sun onto the streets below could cost millions of pounds, facade experts have told Building.

Potential long-term solutions to the problem - which has attracted worldwide press attention this week and has seen the tower dubbed the “Walkie Scorchie” - could include treating the glass, applying an external film, adding external shading elements, or replacing one or more of the facades (see box below). The estimated costs of the solutions range from £60,000 to several million pounds.

The under-construction 37-storey tower has been at the centre of a media frenzy this week, following reports that reflected rays of the sun were melting objects including parts of cars, shoes, shop tiles and bicycle seats in Eastcheap, a street to the south of the building. On Tuesday a reporter even managed to fry an egg in the heat spot.

In a statement the firms said the solution “should minimise the impact on the local area over the next two-to-three weeks, after which time the phenomenon is expected to have disappeared”.

“We are also continuing to evaluate longer-term solutions to ensure this issue does not recur in the future,” the developers added.

Experts at two facade contractors that manufacture and install glass curtain walls told Building a long-term solution to fix the south facade - which is concave and focuses the sun’s light into a beam during the heat of the day – could be costly.

They warned that while treating a small proportion of the glass panes on the south side could fix the problem, this would alter the aesthetics of the building and may not be acceptable to City of London planners, making changes to the whole facade necessary.

Marcelo Santos, project manager at China-based Far East Facade, which launched in the UK in 2011, said the problem “should have been picked up” in the design stage.

An expert at another cladding firm, who preferred not to be named, said replacing all the glass was a “worst-case scenario”.

The experts said that cheaper options would involve treating parts of the glass or applying a film, which could be done by workers using the building’s existing exterior maintenance and window cleaning unit and could cost as little as £60,000. But replacing sections of the facade could cost millions of pounds.

Santos said permanent ground-level shading may be the most cost effective solution, given that altering the glass could mean wholesale changes to the facade.

The experts said the heat ray was likely to move around the London streets below, depending on the time of year.

Ken Shuttleworth, who worked on the nearby Gherkin tower and is founder of Make Architects, said he “wouldn’t wish this on anyone.”

He added: “It’s a shame, when a design team has pushed the boundaries of what can be done.”

Clarification: Far East Facades UK (FEF UK) would like to make clear that the view of Marcelo Santos expressed in this article is his personal view and not that of FEF UK. 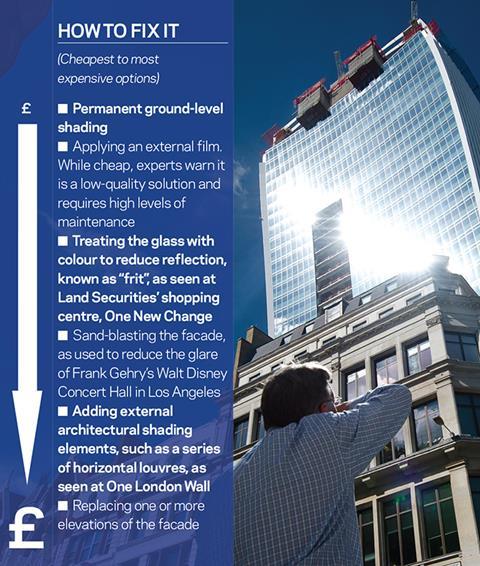