But Willmott said the tables will turn this year because main contractors will have to pay an increasingly expensive supply chain for cheaper contracts finalised in 2010.

“Generally we work on fixed-price contracts and the supply chain market changed in 2010,” he said, adding the firm had been able to “buy [suppliers’] contracts lower than we tendered for.”

However, particularly under the pressure of rising materials costs, tender prices will increase this year, leaving main contractors needing to employ more costly subcontractors for contracts signed last year at the bottom of the market.

Wilmott said that the contractor was budgeting for lower profits this year and a flat order book for the next two to three years.

He said the firm’s orders had held up over the past year, increasing to £983m for the year to the end of March compared with £939m the year before, when most rivals’ orders are declining.

He also said the firm was interested in participating in the government’s Green Deal initiative to insulate up to 25 million homes and in retrofitting commercial buildings. 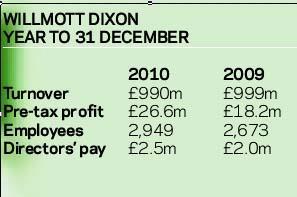