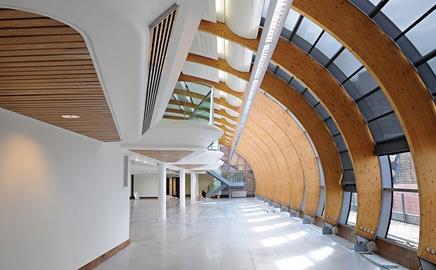 The consultant was originally expected to take possession of the Watkins Gray International and Collado Collins-designed 10 South Crescent early this year. The developer announced completion of the £24m scheme in May, but official sign-off was delayed while dampers were fitted to stop vibrations in a gallery on the top floor (pictured).

The rent is understood to be about £55 per ft2, with an initial rent-free period. The building includes 60,000ft2 of office space.

A source close to the project, which was built by Costain and engineered by Campbell Reith Hill, said: “It’s the same principle as the wobbly [Millennium] bridge. Floor slabs will vibrate at a frequency when you jump up and down a bit. If they vibrate at a frequency consistent with walking pace, the vibration gets worse.”

Roy Collado, partner in Collado Collins, said: “There’s a very small piece on the top floor which was moving outside of the tolerances. The engineer has spent a couple of months with the contractor looking at ways to remove that movement without any visual impact. They’ve done it and G&T will now take possession.”

Tony Burton, G&T’s senior partner, played down the issue. He said: “While there has been a minor problem with one part of the building, this is now resolved.”