British Land has said its schemes at 100 Liverpool Street and 1 Triton Square are now running around six months behind schedule because of the covid-19 outbreak.

In an update days after Boris Johnson put the country into lockdown, the developer said there was around four weeks’ worth of work remaining at Sir Robert McAlpine’s 100 Liverpool Street scheme – part of the developer’s wider Broadgate redevelopment in the City – and nine months left at Triton Square, near Euston, which is being built by Lendlease. 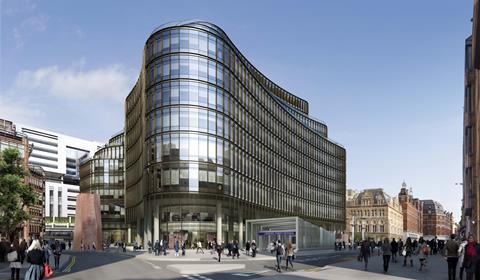 Both jobs were shut in the wake of the lockdown but the firm added: “This work has started with a clear focus on social distancing and safety, meaning that the numbers of people on site is reduced and our productivity is lower.”

McAlpine will also build the next phase of the Broadgate development, a £300m scheme at 1-2 Broadgate, while Skanska has been lined up for the £300m Norton Folgate mixed-use scheme at Shoreditch on the edge of the City.

British Land gave no indication when it would start work on either scheme, saying only it would begin “when appropriate”.

Underlining how much of an impact covid-19 has had on its finances, the developer said it had collected just 68% of the rent due for the March quarter – 97% for offices and 43% for retail.

The firm said its retail portfolio was facing “ongoing structural challenges” from the growth of online shopping but added its office business was holding up – although it expected the trend towards higher density offices and hot desking to reverse in the wake of the covid-19 pandemic.

It said: “Occupiers are working on plans to get back to the workplace and most feel that it is too early to make fundamental long-term changes around their requirements. However, we are mindful that the trend towards greater flexibility may accelerate following this prolonged period of working from home.”

The developer said supply for larger spaces was “constrained” and was combining virtual viewings with physical viewings. “We are encouraged by the level of activity we are seeing,” it added.

It said it expected to sign a headlease on its £3.3bn mixed-use scheme at Canada Water, which was given the green light by London mayor Sadiq khan in February after getting planning last year, with Southwark Council by this summer at the earliest. The deal will see British Land own 80% of the 53 acre site and the council the remainder.

Wates and Mace have both signed pre-construction service agreements for the first two buildings at the sites, called A1 and A2.