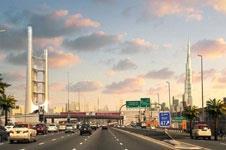 Consultant WSP has been appointed on two major new projects in Dubai.

The UK-based multidisciplinary consulting group won the contract to be structural engineer on the 1km-tall Nakheel Tower, at the core of the multibillion-dollar Nakheel Harbour and Tower development.

WSP has also announced it is to play a major role in Meraas Development's $95bn Jumeira Gardens scheme, as part of the client's programme management team.