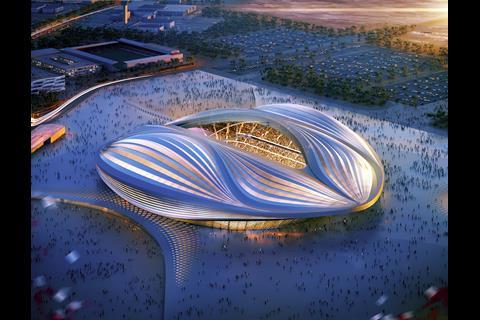 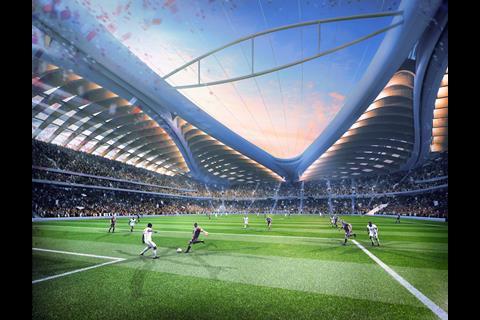 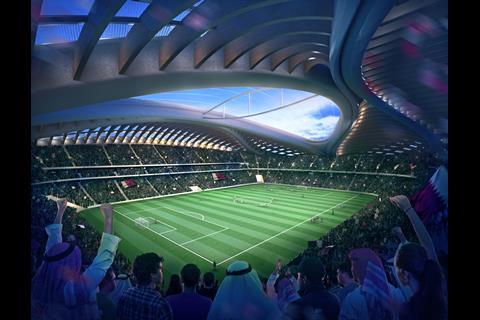 Al Wakrah stadium is currently being designed for a summer World Cup, despite efforts to move the tournament to the winter

Zaha Hadid and Aecom have unveiled new designs for the first stadium to be developed for the Qatar 2022 World Cup, the 40,000-seater Al Wakrah stadium

The stadium features advanced cooling technology and demountable top-tier seating, allowing its capacity to be reduced to 20,000 seats after the World Cup.

It is currently being designed to host World Cup matches in the Qatari summer, despite ongoing negotiations between FIFA and various national football leagues to move the tournament to the winter to avoid searing summer temperatures of up to 50 degrees.

Using a combination of shading, aerodynamics and mechanical cooling, the Al Wakrah field of play will be cooled to 26 degrees and the stands to between 24 and 28 degrees.

At a press conference to launch the Al Wakrah stadium designs, the head of the Qatar 2022 supreme committee organising the World Cup, Hassan Al Thawadi, said all stadia and infrastructure are still currently being designed to host a summer tournament.

Al Thawadi refused to disclose the Al Wakrah stadium’s development cost, saying it was up to the market to price the project.

The tender for the main contractor role will be issued in the second quarter of next year, with construction expected to begin in the fourth quarter. It will be built by 2018.

Tenders for enabling works and main contractor roles on five stadia in total will go out in 2014, with all five set to start on site by the fourth quarter.

The contract to build the Al Wakrah stadium will be the first to incorporate contractual standards to enforce the safe treatment of workers, which is current set out in the Qatar 2022 workers’ charter, the supreme committee said. 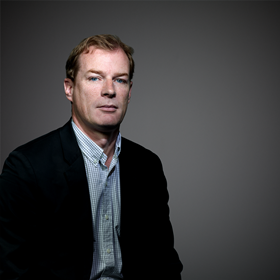 Al Wakrah will be the southern-most host city at the Qatar 2022 World Cup.

The stadium design draws inspiration from the local historic fishing town of Al Wakrah and specifically the sails of the Arabian pearl fishing boat the Dhow, many of which can be found moored in the town’s harbour.

The stadium roof will incorporate sustainably sourced timber ribs to echo the hull of the Dhow fishing boat.

The stadium will be surrounded by a covered and temperature-controlled 72,000 sq m public realm for spectators, which will be cooled to between 30 and 32 degrees.

The demountable top tiers are designed to be packed up into shipping containers after the World Cup to be transported and erected in developing countries.

The unveiled proposals include plans for the area in legacy mode, with a sports zone and community hub - including school, mosque, retail space, hotel and community market - planned for north of the stadium after the World Cup.

Zaha Hadid project architect Jim Heverin (pictured) told the conference shading and aerodynamics were being used to limit the amount of energy needed to artificially cool the stadium and that 15% of the energy would come from on-site solar panels.

He added offsite fabrication will be used “as much as possible” to save time and reduce risks to workers from on-site construction.

The stadium will be suitable for hosting group, round of 16 and quarter final games during the World Cup.

The new Al Wakrah stadium designs are significantly different to earlier concept designs put out by the Qatar 2022 supreme committee, suggesting other stadia designs could undergo substantial changes once architects are formally appointed.