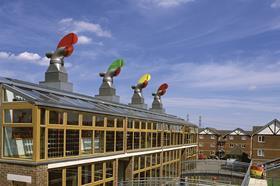 The government’s move to water down energy efficiency targets in its changes to Part L of the Building Regulations means the industry now faces a stiff challenge to meet the 2016 zero carbon target, experts have warned.

The government unveiled its long-awaited changes to Part L on Tuesday (30 July), more than a year after the consultation on the proposals closed.

The regulations set out the energy efficiency requirements for buildings and are seen as critical to making all new homes zero-carbon by 2016 - a key part of the government’s commitment to cut the UK’s carbon emissions.

Under the revisions, new build homes will have to be 6% more efficient than under current regulations - a reduction on the 8% target set out in the consultation, which closed in April 2012.

The changes will also see an uplift in efficiency standards of 9% for non-domestic buildings, which falls short of the 20% improvement proposed in the consultation.

However, as revealed by Building last week, the regulations will now come into force in April 2014, after originally being scheduled to be implemented in October 2013.

In a written statement in the House of Lords, Baroness Hanham said the plans were a “step towards our zero-carbon ambitions”.

She added that the government would be introducing a fabric energy efficiency target, a move that has widespread industry support.

Full details on how this new target will work, along with the targets for different building types and how the improvements will be calculated, are expected to be published next week.

Industry figures welcomed the fact that the government had now published the proposals, after a year of waiting, but warned that the delay in implementing the changes until April next year, added to the smaller than expected uplift in standards, could place the 2016 zero carbon goal under threat.

WSP sustainability director David Bownass said it was “difficult to understand” how the targets had been derived, as they did not form part of the original consultation.

“It seems to be a lot of cost and disruption for such a small improvement over a limited period of time.

“It’s now very hard to see how the industry will be ready to implement zero carbon standards in 2016.”

John Alker, director of policy and communications at UK Green Building Council, said: “There can be no excuses for the length of time this has taken, but finally industry has clarity on Part L.

“The uplift is less ambitious than any of the options consulted upon.

“However, the fact there is any uplift at all is good news.”

David Adams, director at the Zero Carbon Hub, said despite the lower than expected efficiency targets, the strategy to focus on fabric first was a “sensible technical step”, as it would focus the industry on improving building materials.

However, he said concerns remained over the 2016 zero-carbon target.

Andrew Warren, director of the Association for the Conservation of Energy, warned there was now a “short turnaround” before the introduction of zero-carbon homes in 2016. “It has been akin to the length of an elephant’s pregnancy and it has produced a mouse,” he said.

Jack Dromey, Labour’s shadow housing minister, welcomed the announcement of an uplift in standards. “But it is significantly less ambitious than even this government had intended, is months late and now housebuilders will have a short time period in which to implement these changes,” he added.

Andrew Day, director for architecture, design and sustainability at housebuilder Countryside, said the industry needed clarity on the future for allowable solutions and the housing technical standards review. “We need to look at the detail and see what it means, as a smaller uplift now raises questions about achieving zero carbon in 2016.”

Peter Halsall, chair of the Good Homes Alliance, said the industry needed to move to new forms of construction other than traditional ones to achieve the carbon standards that would be required from 2016.

Paul Thompson, head of policy at the Renewable Energy Association, said the regulations showed a “failure of ambition” and “seriously undermined the government’s intention to fully implement Zero Carbon standards in 2016”. He argued stronger carbon targets would have stimulated the installation of renewable energy driven heating systems.

He said: “This is a real missed opportunity, as it is often much cheaper to install renewable technologies during construction rather than retrofit.

“DCLG’s strong focus on reducing costs is also undermined by its reliance on out-of-date cost data for solar photovoltaics.”

John Slaughter, director of external affairs at the Home Builders Federation, said the lateness of the changes meant the industry needed to achieve a interim step towards zero carbon building in “a very short period”. He added: “Today’s statement at least gives some clarity after a long period of uncertainty.

Peter Caplehorn, technical director at architect Scott Brownrigg, said the uplift in standards was less than most people thought it would be. But he added: “I think the fact that the government has made an announcement is really good because we have been suffering from the uncertainty, but it will [now] be a challenge to hit the desired zero-carbon targets.”

He said it was important that the industry get speedy access to the software modelling that will monitor compliance with the regulations so it can start working on designs to meet the criteria.

Peter Halsall, chair of the Good Homes Alliance, said: “A 6% increase does not act to stimulate the innovation the industry needs.” Halsall said the industry needed to be moving into using forms of construction other than traditional ones to achieve the carbon standards which would be required from 2016.He said that today’s announcement also showed a decision on allowable solutions “keeps getting kicked into the future”.

Andrew Orriss, head of business at energy efficiency firm SIG 360, said: “With something as important as Part L, I’m firmly of the belief that it’s better to get it right late than not get it right at all.”