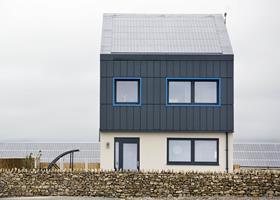 The creator of the UK’s first ‘power station house’ - the Solcer House in south Wales, which generates almost three times more energy than it needs - has slammed the government’s U-turn on zero carbon homes.

Keith Bygate, head of the Specific research centre that came up with the concept behind the Solcer House, told Building the cutting-edge scheme demonstrated zero carbon buildings were “commercially viable”.

Solcer House (pictured) was conceived by Specific, a research centre based out of Swansea University, and designed by the Welsh School of Architecture at Cardiff University. The scheme attracted widespread national media coverage last week.

Over the course of a year, the zero carbon ‘smart home’ generates £175 in energy exported to the national grid for every £100 spent on its own electricity use.

He said: “The government said it was going to be a financial burden, but this house shifts the game as we’ve shown it is a cost-effective way to provide clean and secure energy.”

He added: “All of the components are commercially available so there are no real skill barriers to making these houses. The whole point of it was to build something that can be replicated.”

The naturally heated and ventilated home generates 32% more energy than it consumes.