This week we take a look back at a Building feature investigating the science behind playing surfaces in the mid 90s, when grass specialists was a relatively new concept 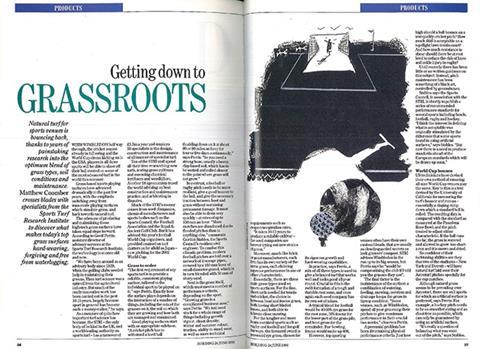 Getting down to grassroots

As we get stuck into a summer of sport, much will be made of the varying states of turf being competed on. Is the grass at Wimbledon creating the right bounce? Is the pitch in Brazil of a high enough standard? But the scrutiny of the science behind playing surfaces wasn’t always commonplace, as Building’s article on 24 June 1994 shows. Investigating the relatively new concept of grass specialists, products editor Matthew Coomber met with the Sports Turf Research Institute, who spoke of advancements in creating the right drainage, maintenance and bounce for a particular pitch - and the importance of achieving the right balance for whichever sport it was intended. While they were somewhat coy about the secret grass blend created for Wimbledon, they were more candid about grass provisions used in the ongoing USA World Cup 1994. “US technicians have devised their own method of ensuring all nine World Cup venues play the same. Key to this is a test devised by the University of California for measuring the turf’s bounce and run-on - essentially a sloping ramp down which a standard ball is rolled […] If the ball runs too far, the grass is watered and allowed to grow: too short a run and it is mown and dried.”