As One Brighton marks its fifth birthday, we take a look back to 2013 when it was profiled as a cost-effective model for sustainable living 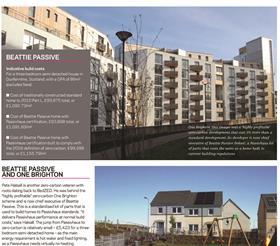 The current issue of Building marks the fifth birthday of the eco-friendly One Brighton housing development by speaking to its residents and owners to discover how successful the project has been. In the 8 February 2013 issue of Building, the One Brighton site was used as one of three case studies of low and zero-carbon housing, supporting the magazine’s Green for Growtcampaign as the government’s carbon reduction targets entered a state of fl ux. Featured alongside other sustainability-focused projects Beattie Passive and AIMC4, OneBrighton was commended for managing to deliver zero-carbon housing at market prices, while still making a healthy profi t. Pete Halsall, who was behind the project, revealed that building costs were kept to just 3% more than a standard development, aided in-part by saving £2m by going without a basement-level car park. Speaking to group technical editor Thomas Lane, Halsall revealed details of the provisions to keep the building’s construction ecological: that the concrete frame of the development utilised post-tensioned slabs, which reduced the amount of concrete needed. It was made from concrete containing 50% cement substitute and 100% aggregate, which was green and also saved money.