With Tower Bridge celebrating its 120th birthday this week, we head back 20 years in the Building archives to when a Danish model-maker constructed the iconic landmark entirely out of Lego 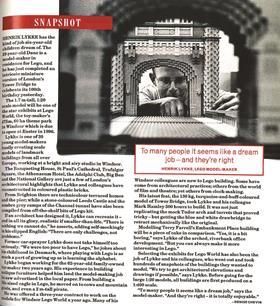 This week saw Tower Bridge celebrate its 120th birthday. Twenty years ago, when the bridge first made it to triple figures, Building picked up on the story that Henrik Lykke, a full-time model maker employed by Lego, had been commissioned to recreate a scale version of London’s most iconic bridge out of the toy plastic bricks, as a way of celebrating the landmark birthday. Featured in the 24 June 1994 issue of Building, the 1.7m tall, 1:20 scale model was built to feature in the toy-maker’s Windsor theme park, then dubbed Lego World (later becoming Legoland), which was due to open in spring 1996. Speaking to Denise Chevin, Building’s then features editor, Danish model-maker Lykke, who, along with his team of 30 model-makers, also created other UK landmarks such as St Paul’s Cathedral, Trafalgar Square, Big Ben, Brighton pier, Leeds Castle and the Channel Tunnel out of Lego, revealed that the Tower Bridge replica took him and one other colleague 500 hours to build and weighed 130kg. “We try to get architectural elevations and drawings if possible,” said Lykke. “There is nothing we cannot do […] there are only challenges, not problems.”