Some 55 years ago, Building’s leader was on a subject that has had tragic cause to be on the receiving end of much scrutiny this week – fire regulations 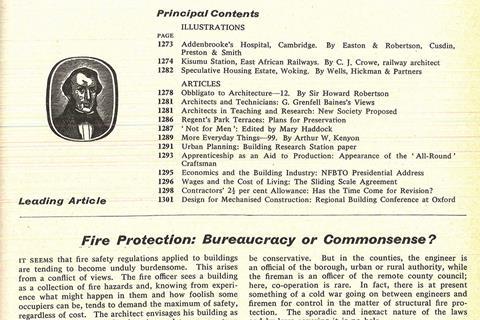 A look from the past at a very current issue

Some 55 years ago, Building’s leader was on a subject that has had tragic cause to be on the receiving end of much scrutiny this week – fire regulations.

At the time of writing, many questions were being asked about decisions made regarding Grenfell Tower in Kensington.

In 1962, Building discussed differing views held by sections of the industry involved in fire protection as high-rise flats became fashionable. The BSI’s Council for Codes of Practice had just published a guide called Fire precautions in flats and maisonettes over 80ft in height, which it said had been agreed by fire officers, local authority engineers and scientists.

One focus of the piece was conflict between fire officers, whose primary concern was (of course) safety, and architects who, the writer says, tend “to regard the cost of fire-safety measures as an overhead charge on a building”.

The conclusion suggested improved communication: “The architectural profession [could] master the technology of fire protection (as it has done with other technologies) so that fire problems can be discussed in a common language”.

To read the full article from 22 June 1962, download the PDF below