Quality of design becomes a greater consideration in UK prisons 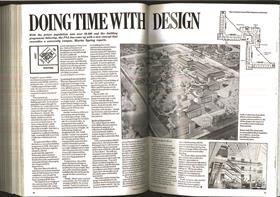 As the UK government looks to build nine new prisons with a focus on regeneration, we head back 30 years, when prison design in the country was again undergoing reform. Then, the Property Services Agency was inspired by American designs that not only heightened security, but simultaneously introduced eye-catching landscapes that had been inspired by university campuses.

Reporting in 1987, Building’s Martin Spring said: “The prime motive behind the design rationalisations is the absolute need to keep prisoners securely under control. But the American trip has opened the eyes of British designers to the fact that absolute security is far from incompatible with an attractive environment. Thus the parklife landscape not only provides a pleasant setting, it functions as a means of circulation between buildings that can be easily supervised from a central point. The atria in the accomodation blocks perform a similar dual function. And the pitched roofs with generous eaves also happen to be near impossible for prisoners to climb up on to.”