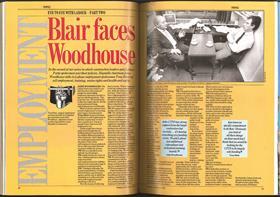 Hot on the heels of last week’s Labour Party conference in Brighton, the lates issue of Building sees Mark Leftly give Corbynomics the once-over, speaking to the Labour leader’s economic adviser Richard Murphy to suss out how valid the party’s economic argument truly is. So as Jeremy Corbyn seemingly ushers out the last remnants of Blairite influence within the party, we take a trip back to 1990, when Tony Blair - then Labour employment spokesman - was locked in a room with Haymills chairman John Woodhouse, who came armed with an assortment of quickfire questions on self-employment, union rights, training and health and safety.

“John Woodhouse: In terms of union powers, over the years the construction unions have been weakened and they have been weakened tremendously because of the move to self-employment. Are you going to maintain the present legislation or are you going to make it easier for them to disrupt activity? Tony Blair: Our purpose has been to create a fair legal framework for unions to operate within. We recognise there is no going back to the 1970s and the unions have accepted that they should operate within the law.”