Making your mark in Berlin 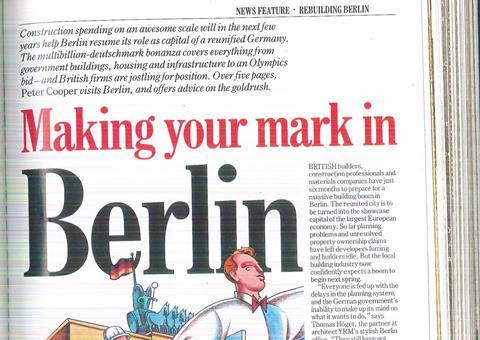 This week, the nation goes back to school and Building looks at education funding, but in 1992 construction was looking at going somewhere quite different.

Auf Wiedersehen, Pet might have finished on TV several years before but builders’ gazes were still fixed firmly on Germany, writes Helen Burch.

Many key sites in its reunified capital city needed rebuilding, so we published a comprehensive guide to help eager professionals become “ein Berliner”.

Some in the industry were waiting impatiently for a spike in contracts. Thomas Höger, of architect YRM, said: “Everyone is fed up […] with the German government’s inability to make up its mind on what it wants to do.“ But a boom was still confidently expected for spring 1993.

Our guide suggested those hoping to get in on the action get plenty of advice from bodies such as the Department of Trade and the German Chamber of Commerce and Industry, the latter of which might recommend a joint venture partner with local knowledge. But proceed cautiously – “gangs of cowboy developers roam the streets”. And don’t forget your pistol and a stetson by the sound of that advice.

To read the full article from 4 September 1992, go to, download the PDF below