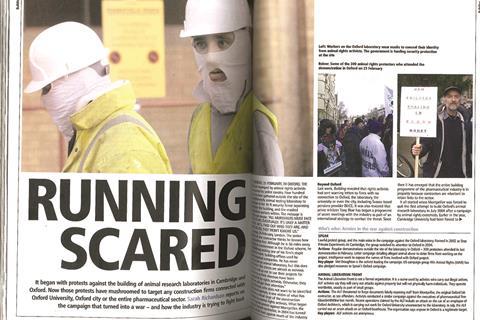 This week in 2006, construction workers in Oxford were forced to conceal their identities as 400 protestors gathered outside the site of an animal research laboratory being built in the city, writes Hollie Tye. The project had already been in turmoil for more than a year, as activists not only drove the original contractor off site, but then sent letters to intimidate other firms in the city. With various directors deciding to cut ties due to fear of a backlash, prime minister Tony Blair stepped in to try and combat the threat.

Reporter Sarah Richardson said: “Last week, Building revealed that rights activists had sent warning letters to firms with no connection to Oxford, the laboratory, the university or even the city, including Sussex-based pensions provider B&CE. It was also revealed that prime minister Tony Blair has begun a programme of secret meetings with the industry as part of an international strategy to combat the threat. Since then it has emerged that the entire building programme of the pharmaceutical industry is in jeopardy because contractors are reluctant to retain links to the sector.”