Coffee with a dragons 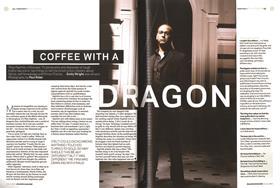 Theo Paphitis is one of the most instantly recognisable businessmen in the country. By 2009, the retail tycoon and former Millwall Football Club chairman’s profile had taken a massive boost via his part in the success of the business-pitching TV show Dragons’ Den, but the multimillionaire still had experience of defeat earlier in his career. It was through this that he was able to deliver some words of wisdom to a construction industry in the throes of recession in this interview with Building reporter Emily Wright.

It read: “This early failure, and his later success, have given Paphitis the credentials to be a business guru. But on the state of the construction industry today, his advice may not be what people want to hear: ‘It was the emperor’s new clothes. Some called it, sold landbanks and got cash in. Is that because they are cleverer than everyone else? Or is it because they said: ‘Shit, the emperor’s got no clothes on’? Denying this recession was like trying to defy the laws of gravity and I don’t care if you are the chairman of the biggest building company in the whole world, you are not going to defy the laws of gravity. People were on the merry-go-round and they didn’t get off. Here is my advice: You. Should. Have. Got. Off.’”