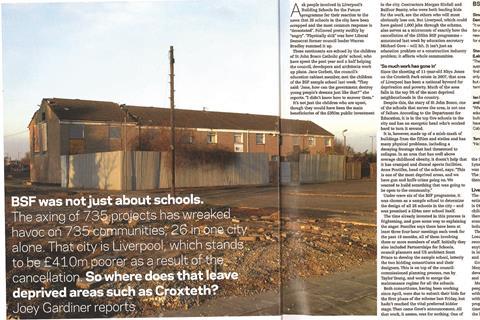 As the new academic year starts, we look back to this time in 2010 when the newly elected coalition government had just scrapped the Building Schools for the Future scheme. The axing of more than 700 projects caused uproar all over the country, as the £55bn programme would have benefited most communities.

In a Building feature from July 2010 Jane Corbett, Liverpool council’s education cabinet member, said that the girls of St John Bosco Catholic girls’ school had asked her “how can the government destroy young people’s dreams just like that?” The cuts put an estimated 68,000 construction jobs at risk.

With the programme scrapped, the government decided that instead of spending all of the money it did have for schoolbuilding on improving existing schools, it would build new “free schools”. The Conservative Party in its 2015 election manifesto only made slight reference to schoolbuilding, pledging to build 500 free schools in the next parliament.

This, combined with the schemes so far announced under the Priority School Building Programme, will not solve the lack of places in secondary schools, so the industry must wait to see what – if any – further plans will be laid out in the Autumn Spending Review.