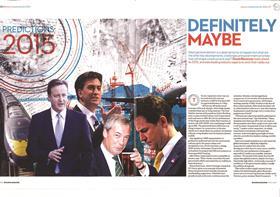 A Conservative election win, the All Blacks retaining the Rugby World Cup on British soil, and the rising popularity of Donald Trump. Few could have predicted the occurences of 2015, and yet that’s exactly what Building asked of five industry experts 12 months ago as part of a larger look ahead at what the year might hold. And now, with the advantage of hindsight, we can applaud the predictions that were entirely accurate, and scoff at those wide of the mark.

Sticking his neck out on what the key developments affecting architecture might be, Jack Pringle, principal and managing director of Pringle Brandon Perkins + Will, said: “The recovery will level off running up to the election and then pick up again as confidence returns and as the eurozone recovers. After a period of posturing on both sides, the next government will be essentially Tory with Boris Johnson as home secretary - effectively mayor of England.

“Airport expansion will be announced in autumn 2015. Gatwick is the obvious answer, so it’s likely to be Heathrow. This decision can’t be made until the election and then has to be made as soon as it has happened because it will be so unpopular.”