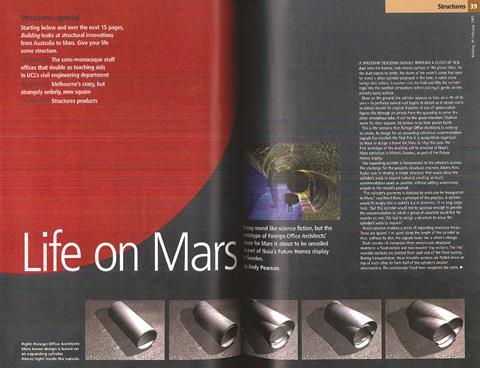 As the housing crisis continues, perhaps it’s time to consider options further afield. This week in 2001, Building looked at innovations that had taken place throughout the year, and the design for a house on Mars was top of the list.

Foreign Office Architects had designed an expanding cylindrical accommodation capsule, which had reached the final five in a competition organised by Nasa to accommodate for life on Mars. The first prototype was due to be unveiled at Nasa’s Mars exhibition in Sweden, as part of the Future Homes display.

Reporter Andy Pearson wrote: “A spaceship descends slowly through a cloud of red dust onto the barren, rock-strewn surface of the planet Mars. As the dust begins to settle, the doors of the vessel’s cargo bay open to reveal a silver cylinder cocooned in the hold. A robot crane swings into action; it reaches into the hold and lifts the cylinder high into the rarefied atmosphere before placing it gently onto the planet’s rocky surface.

“Once on the ground, the cylinder appears to take on a life of its own - its perfectly curved wall begins to distort as it slowly swells to almost double its original diameter.
A row of space-suited figures file through an airlock from the spaceship to enter the shiny, amorphous tube. It will be the space-travellers’ Martian home for their sojourn, 35 million miles from planet Earth.”