Construction is now 12 months into its recovery and project procurement has become much more challenging - even in the regions. SImon Rawlinson of EC Harris takes soundings from projects and considers the best options in a fast-moving market

If there is one UK industry that is currently riding the crest of the recovery, then it is construction. With output up by 4.8% year-on-year, the industry is growing far faster than the wider economy, albeit while recovering from a much deeper contraction. Forward indicators of activity point to continued expansion of workload, with the widely read Markit construction purchasing manager’s index (PMI) pointing to much better growth prospects for construction than either manufacturing or services. With the PMI index standing at levels not seen since autumn 2007, some worrying parallels to the previous boom are emerging - particularly with respect to resource availability and the viability of projects. It is increasingly clear that the market is entering a period of high volatility - just as a raft of complex, high-quality schemes are coming to the market both in London and the regions. Resolving the interests of suppliers who need to secure profitable work, and clients who are focusing on achieving certainty on their projects is never easy but, at this point in the cycle, good execution of procurement strategy is playing a crucial role in setting up projects for success.

For once, construction has not been the last sector of the UK economy to come out of recession. The recovery, now into its fifth quarter, could not have come a moment too soon, evidenced by weak financial performance across the sector. However, the damage inflicted by six years of downturn - in terms of workload, employment, insolvency and profitability will be long-lasting. What might have been a steady recovery has been ignited by the housing boom which has seen extremely rapid rates of growth during 2013/14, even if actual workload remain 35% below the peak seen in 2007. The housing boom itself has had three key impacts which will help to determine the shape of the recovery: Firstly, growth has occurred in a sector which is less price sensitive than others, such as retail or the utilities, due to rapid house-price inflation; secondly, the scale of projects in central London has absorbed a great deal of contractor and materials capacity; and thirdly, the legacy of residential projects delivered at rock-bottom prices during the downturn is a highly risk-averse approach on both sides of the contract. These factors are combining to make project delivery even more challenging as the recovery gains pace. 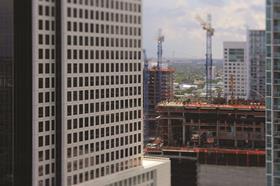 How market conditions evolved during the downturn

The UK construction industry entered the 2008 crash after a sustained period of expansion in activity. However, project profitability had been eroded for both clients and contractors by general inflation, the global commodity boom and the collapse in the value of the pound. When the downturn came, goodwill in the industry was in short supply and many clients relied on taking full benefit of changes in market conditions to ensure that their projects remained viable.

From the peak of the market in the first quarter of 2008, volumes of work fell by 20% in a year. Construction prices initially fell by 10% by the end of 2008 and eventually stabilised at around 25% below peak price levels. Taking into account background inflation in wage agreements etc, by the time the recovery took hold prices were at a discount of around 35% to 2008 levels. Employment fell by at least 15% - involving the loss of at least 430,000 jobs, and over 20,000 business failures occurred between 2008 and 2013, which is twice the long-term rate of failure.

Many clients shifted quickly to procurement models based on variants of single stage, lump-sum design and build contracts. Initially, these projects were relatively easy to procure, with main contractors being able to secure deep discounts from throughout the supply chain. However, as the downturn continued projects became progressively more difficult to resource and deliver. A round of main contractor profit warnings and restructurings in 2012 demonstrated how deep the problems had become, with some contractors submitting sub-economic bids to maintain turnover. As the market started to recover in mid-2013, the degree of competitive pressure on projects began to fall. However, it will still take at least another 9-12 months for contractors to work through the discounted jobs on their books.

In anticipation of a recovery in the market and in recognition of the limited capacity for bidding in the supply chain, clients began to change procurement strategies in 2012 and 2013. In the infrastructure and utilities markets, employers have been able to leverage their large long-term programmes to put in place performance-driven alliances and frameworks that align the commercial interests of the supply chain with that of the client. In commercial markets where one-off appointments are more common, a gradual shift to two-stage tendering has taken place - initially with elements of competition in the second stage, but more recently with a single main contractor and a competitively tendered second tier of specialist sub-contractors. Even based on the two-stage procurement model - which increases the visibility of specialist sub-contractors and which reduces abortive bid costs - projects in some markets are increasingly difficult to procure successfully. As a result, the effective promotion of projects by clients into their marketplace and the management of the design and procurement process by their advisors have taken a crucial role in securing bidder interest and certainty of outcome.

Developments in the past six months have shown that a set of commercial skills needed to deal with the uncertainty and ambiguity of two-stage bidding are being re-learned by a new generation of clients, consultants and contractors. For businesses that have grown accustomed to the apparent certainty provided by lump-sum tenders, the learning curve is proving to be steep. In particular, the second bid stage on some projects is being used by some bidders as an opportunity to test the commercial resolve of clients and their teams - their access to current, quality market data, ability to analyse complex submissions and willingness to challenge the supply chain’s proposals. Working through this stage effectively is essential so that projects remain viable and are established on a fair financial footing.

How market conditions have evolved during 2014

Most forecasters anticipated that the construction recovery would become firmly established during 2014, but, in reality, the change in market sentiment occurred far faster than many clients and their advisors expected. Specialist contractors in particular are increasingly confident about the strength of the recovery and the implications for their ability to secure favourable commercial terms on the projects which they selectively target. Key aspects of the evolution of the market over the past six to 12 months include:

The combined effect of these developments has been to exaggerate some of the feverish aspects of market conditions even while workload levels remain significantly below pre-crash levels. This is not a universal state of affairs, and in some circumstances, it is possible still to let a project using single-stage D&B. These projects are very much in the minority though - even in the regions.
Clients and their teams have been used to working in a market weighted in favour of the employer and in some cases did not recognise the potential for the balance of power to shift quickly enough. At the same time, some bidders may be taking an overly-optimistic view of the strength of the recovery, which has resulted in a highly volatile tender market. Should some projects be delayed or cancelled due to funding or affordability challenges, then the market dynamic could see another dramatic shift. 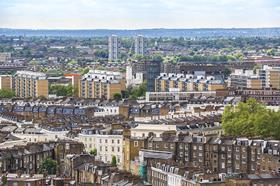 Critical success factors for procurement in an upturn

Market forecasts currently indicate that construction activity will increase at around 5% per annum for the next three to four years. Although the volume of workload is not expected to reach pre-crash levels before 2017, a combination of large, complex high-risk residential and regeneration projects can be expected to sustain activity levels in all of the UK’s major construction markets. The implication is that, for the foreseeable future, clients need to be particularly proactive in the procurement of their projects. There are a number of steps that clients and their project teams can take to increase the likelihood of a successful outcome on their projects, including:

Procurement solutions for a rising market 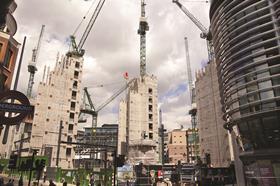 Changed market conditions require clients to alter their own approach to procurement to assure that projects continue to deliver certainty and value. At the root of effective procurement is a good quality, robust and buildable design that provides an attractive risk profile to the supply chain. Close alignment of design deliverables with the execution of the procurement strategy and construction methodology is essential to de-risk a project and to present it as an attractive proposition to potential contractors. Effective procurement in a market upturn relies upon close attention to the basics of design management and change management as well as a more flexible approach to the allocation of risk. Clients depend on their teams to deliver this discipline and will need to play a part through their own commitment and engagement with the project. Team building starts during the bidding process and procurement provides a key opportunity for clients to establish the right performance culture.