Meridian Water: From the ground up 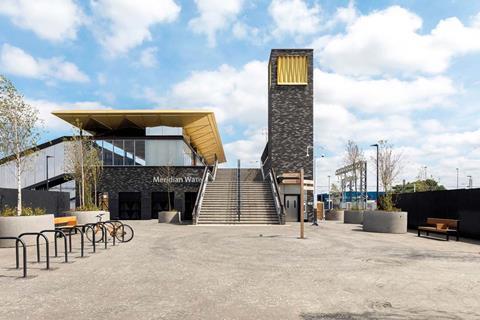 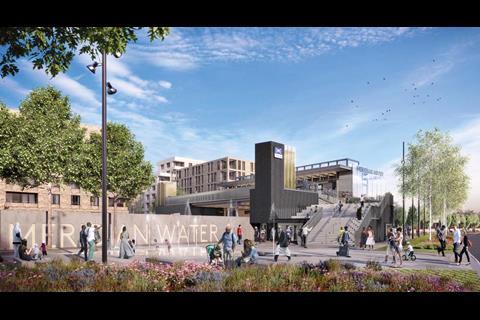 How Station Approach, Meridian Water, will appear when finished 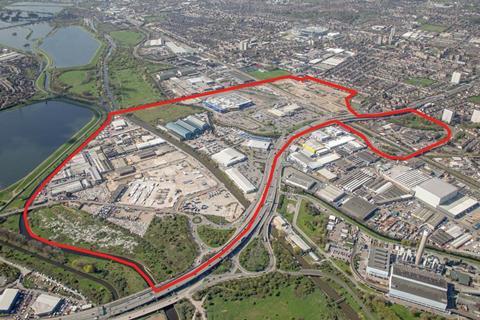 An aerial view of the site 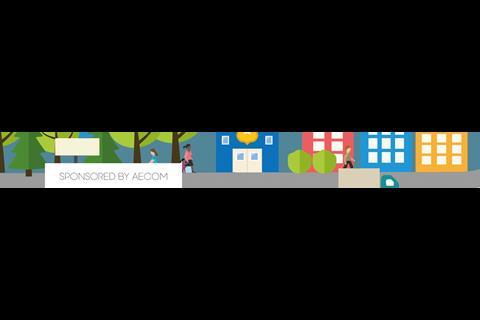 In one of the country’s most deprived areas, a new scheme – Meridian Water – is aimed at tackling not just a lack of affordable housing but also unemployment, poor health and low incomes. Debika Ray reports

Meridian Water, a development in Edmonton, north-east London, has been on quite a journey already. Initially the local council planned to have a light-touch role – mainly in masterplanning the development – but the developers were turned off by the level of risk involved with this site in Enfield, a borough containing some of the most deprived areas of England.

The local authority decided to reduce risk by taking over ownership of most of the site itself. It now owns 70% of the developable land, which also meant it could build a new rail station, Meridian Water, to improve the area’s transport links.

Ultimately, the council rejected bids by housebuilders to lead the development after determining they would do little to benefit local people, and decided to take on the role of master developer itself, and thus full control of the project. This seemed the best way to deliver on its top priority: to ensure that local people were the principal beneficiaries of the scheme.

“If we were reliant on a private sector partner, they would have too much power over determining the future of the area,” says Peter George, programme director of the scheme at Enfield council.

Under this model, the local authority can shape how land is used – what housing is built, where jobs are created, and how much open space is included – as well as tying its strategy into the wider social priorities of the borough, addressing deprivation, joblessness, homelessness, low incomes and poor health, rather than looking simply at financial returns or the number of homes delivered. Moreover, by insisting that all the developers it works with contribute to a “community chest”, it has made sure it will have funds to achieve projects that the local community want.

In simple terms, Meridian Water is a housing development – an unoccupied 85ha site on which 10,000 homes will be built over the next 25 years. Aecom was brought on board to conduct research to support these delivery aims, including the development of housing research and a handbook that will allow it to monitor its progress against these targets over the coming years. “Social value is at the heart of the project,” says Kerry Parr, associate director of housing research and delivery at Aecom. She observes that housing is about far more than just numbers. “Secure and affordable housing is key to achieving wider health and wellbeing outcomes for local people, as it has an impact on everything from school attendance to disposable income.”

Aecom’s research into housing need took into account data on incomes and benefits, as well as prices, rents and feedback from housing officers, to build up a detailed picture of affordability at the local level – which turned out to be complex. It particular, it focused on tenure – for example, whether homes are owned and rented. “Through our research we aimed to understand what is required in terms of affordable housing – how much different households can afford, what their issues and situations are – so the council can respond and potentially adjust their plans over time,” Parr says.

The research identified high concentrations of low-income households within the area, in part because relatively lower rents meant homeless households from within the borough and elsewhere were being placed in temporary accommodation in Edmonton. It found that, for many households, housing benefit was not enough to cover their rent and so housing costs were eating into their other living costs. Meanwhile, households higher up the income scale were unable to save for a deposit to buy a home because rents were so expensive.

Findings like these emphasised the urgent need to diversify the housing mix in the borough, delivering more affordable homes for both rent and ownership to allow families to sustain their tenancies and put down roots. The council’s plan will take all these findings into account. Perhaps most strikingly, local people will get priority access to all affordable housing built within the scheme.

Housing alone cannot tackle the complex needs of the area – and Aecom has emphasised that its research needs to be tied in with other social interventions to maximise impact. More widely, the council was starting to intervene by leasing properties from private sector landlords on a long-term basis, to let to households in need on a more secure and affordable basis. By taking on the role of developer, the council is able to do much more, drawing on its understanding of Enfield’s other requirements and making sure Meridian Water meets them.

A boost for employment

Among the most urgent challenges is unemployment – which runs at up to 12.6% in some parts of the borough, and is particularly acute in Edmonton. There is also a lack of employable skills, which contributes further to high levels of deprivation. In response, the council hopes to create 6,000 “quality jobs” at Meridian Water, including 1,000 in construction. All these jobs will pay the London living wage as a minimum, but about a third are expected to have salaries of above £50,000, which will ultimately help more local people afford accommodation in the private sector.

The intention is not simply to relocate employers from other parts of Enfield – after all, the existing jobs these businesses offer are part of the local low-wage economy that exists there. Instead, the plan is to nurture new SMEs and attract established companies from outside the borough.

“We’ve already made progress with that by partnering with the real estate company Prologis, which will be delivering more than 500 jobs here over the next few years. Ikea and Tesco will also remain and have committed to working with us,” George says.

The target is for half these jobs to go to local people, and the council has promised that £360m of construction contract value will go to local companies. For that to happen, the skills shortage in the borough first needs to be addressed. The council has prioritised the building of skills academies as part of the scheme – with one for construction already planned and another in the offing.

“We need to provide the connection between the thousands of quality jobs we’re going to be generating and the local people, because without that, there’s going to be a mismatch,” George says.

With an eye on the new landscape created by the covid-19 pandemic, and the likelihood that more people will work from home in future, the council is looking to increasing the amount of pay-as-you-go communal office space, to help those who lack space to work at home or who miss the social interaction of the office. A greater proportion of open, outdoor space has also entered the plan since the start of the pandemic – up from 15% to 30%.

Health and wellbeing were a priority on the scheme long before the coronavirus appeared – it is another area with which the borough struggles. A new health and community facility and affordable gym will help address these issues, tackling everything from obesity to loneliness. Better access to the River Lea Valley will create access to nature and public space, and pushing down car parking levels will reduce congestion.

The council is defining wellbeing in a broad way. “A local man said to me recently that he wanted to take his wife out for dinner but couldn’t find anywhere to go apart from the Premier Inn restaurant,” George says. “Some nice food and beverage facilities will make a big difference here.”

A thoughtful, targeted approach will also apply to the creation of schools. “The first school we’re looking to deliver is one that focuses on special educational needs, because we have a high and growing proportion of children in the borough that have these,” says George. “At the moment the council is having to export these children to other boroughs, at huge expense and distress to them, so again this plugs into the council’s objectives.”

The council is able to draw on the expertise of its teams to develop these plans, but ultimately their success will require engagement with the people who live in the neighbourhoods surrounding the site. “One of the lessons that has been learned there is the paramount importance of establishing a close working relationship with the local community,” George says.

Although there is no opposition to the development per se, there is some cynicism about the benefits the scheme will bring. Before consultations go further, the council needs to build greater trust with the people who will be affected by the proposals.

“When I attend community meetings, top of the agenda are issues such as prostitution, anti‑social behaviour, crime, street cleanliness and fly-tipping, so until the council can make progress on those, they’re not in a position to have more in-depth engagement,” says George.

The train station has helped people feel less disconnected and we’re also about to invest £800,000 in anti-social behaviour officers, again to demonstrate that we’re addressing their priorities

The council’s efforts at improving public relations include increasing the provision of street cleaning vans, complete with Meridian Water branding. George says: “The train station has helped people feel less disconnected and we’re also about to invest £800,000 in anti-social behaviour officers, again to demonstrate that we’re addressing their priorities. We have also commissioned local artists to produce pieces in the area, all of which are building blocks to a better relationship. Once we’ve made more progress on that, then we will be able to take the relationship to the next stage.”

A major challenge with a project like this is that the benefits are not as tangible as the concrete numbers involved in assessing financial returns or counting housing units. Strategic development manager Elizabeth Rapoport, who led the research from the council’s side, says: “A lot of the benefits are going to be captured over the long term and over a wider area.”

She has been working with Parr on developing ways of measuring progress over the next 20 years, for example whether the right people are getting the homes they need, as well as more complex measures such as the impact on children’s educational outcomes of providing families with secure housing rather than temporary accommodation.

“Then you have the financial benefit to households if they are not spending all their income on high housing rents, which means they have disposable income that they can spend on food and other living costs, with knock-on benefits for health and wellbeing of both children and adults, and on the public purse, by reducing the cost of providing the temporary accommodation and paying landlords on a nightly basis,” says Parr, “which in turn benefits the economy and society as a whole.” 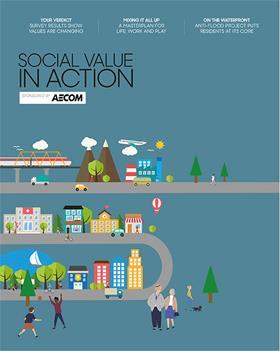