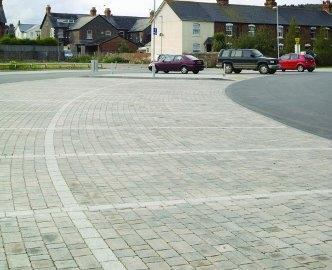 Climate change means things can only get wetter in this part of the world, so sustainable urban drainage is more important than ever

Scientists predict that as global warming takes effect, heavy rainstorms will become more and more intense. The theory is simple: as the atmosphere heats up it is capable of holding more water, so when it does rain there is a lot more of it to fall.

For areas already prone to flooding that is not good news, which is why Somerset County Council wanted a sustainable urban drainage system (SUDS) included in its £6m redevelopment of Minehead town centre.

Traditional drainage is intended to remove water from a site and pipe it to a watercourse as quickly as possible. This can increase the risk of flooding downstream and lead to contaminants, such as motor oil, flowing into rivers and streams.

Rapidly diverting rainfall from a site also means it does not have a chance to soak into the ground, which depletes groundwater reserves.

Sustainable urban drainage systems work in the opposite way. They have been developed to retain water on a site to reduce the volume and velocity of surface runoff and hence reduce flood risk.

SUDs can help filter out contaminants and, in some cases, the retained water can be harvested and used to water plants or flush toilets.

For the Minehead project, architect Aedas specified Hanson Frompave’s Aquaflow drainage system. More than 6500m2 of the permeable paving is linked to a tanked underground store, controlling the runoff from a car park, hard landscaping and from the roofs of the buildings forming the mixed-use development.

According to John Lloyd, head of design services at Hanson Formpave, the system is designed to cope with a 1 in 100 year event with an additional 20% capacity to account for increased rainfall resulting from climate change.

The system works by using outsize joints between the load-bearing brick setts, which allow water to pass between the pavers to be captured in the sub-base storage area.

The rainwater is then filtered as it passes through the graded-stone bedding layer, sub-base and geo-textile membrane, before being slowly released into watercourses at a controlled rate to avoid overloading sewers and drains.

Runoff from the development’s roofs passes through a sump with a manhole to ensure any debris is removed before the rainwater enters a distribution tank with a geotextile surround incorporated within the tanked sub-base.