Neighbours: Lovell and Tarmac on reaching code level four or above 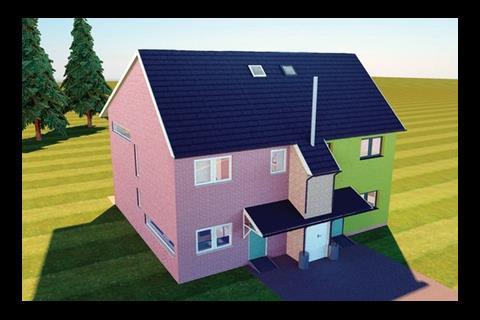 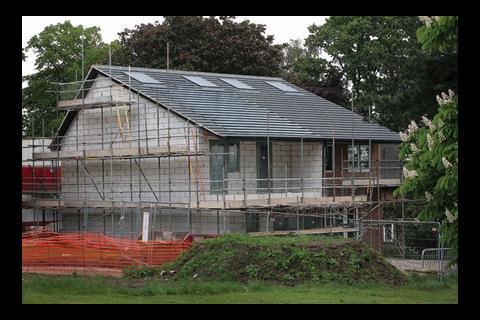 The house on the left aims to meet code level four, but next door they’ve got even loftier pretensions. Stephen Kennett reports on goings-on at a site in Nottingham

The industry has had more than two years to get to grips with the Code for Sustainable Homes. During this time, a few brave firms have tried to design and build code-compliant prototype homes, and four even braver ones did so under the spotlight at BRE’s Innovation Park in Hertfordshire. The houses attracted a lot of interest and highlighted the challenges of complying with the code, but they did not provide convincing solutions for the mass social housing market.

A scheme now under way at the University of Nottingham might. Amid the cluster of radical-looking, low-energy houses that has been built as part of the university’s Creative Energy Homes project, there is a pair of very ordinary-looking semis. They are being constructed by manufacturer Tarmac and housebuilder Lovell and, despite their ordinary looks, these two homes are aiming for code levels four and six.

According to Phil Sabin, project manager for Tarmac, the mantra for the team behind the houses was: keep it simple, affordable and repeatable. “Simple in terms of its design, affordable in terms of the sector we’re aiming at – the social housing and local authority market – and repeatable, in that we didn’t want any special technologies or use any specialists that aren’t in our normal supply chain,” he says.

The team has ruthlessly avoided any temptation to increase the specification or use any bespoke products beyond the requirements in the code.

So how are they doing it? The design is based around a typical three-bedroomed Lovell home. The house on the left is designed and built to code level four, while its counterpart on the right is aiming higher, for level six. The obvious difference from the outside is the external finish, which is the main clue to the different envelope constructions being trialled.

The level-four home uses cavity wall construction with an inner-leaf blockwork, a 150mm cavity and an outer leaf of facing bricks, giving it an overall wall thickness of 353mm, compared with the more traditional 302mm, and a U-value of 0.19W/m2/K.

The level-six home, on the other hand, has solid-wall, thin-joint construction using Durox, an aircrete block from Tarmac, which is finished with 150mm of phenolic insulation and then rendered. The solid walls have a U-value of 0.15W/m2K, and a thickness of just over 370mm. James Wilcox, development co-ordinator with Lovell, says the team could have used a cavity wall for the level-six home, but it would have needed to include extra renewables to make up the shortfall in CO2 savings.

Of course, the biggest challenge is airtightness. The team is taking a whole-house, rather than floor-by-floor approach, to getting an airtight envelope.

One thing in the contractor’s favour is the conventional nature of the homes – they do not use complex facades or curving roofs, which makes sealing and remedial work straightforward. For the level-four home, the target was 4m3/m2/h. According to Wilcox, the company has achieved 3.7m3/m2/h before on conventional builds and he doesn’t think this will be a major challenge.

Care was needed sealing around the windows and service penetrations, but no more than normal, says Wilcox. The contractor has, however, taken the precaution of applying an 8mm render coating on the face of the internal blockwork to seal any holes before the plasterboard drylining is applied.

For the level–six home, the airtightness target is a more challenging 2m3/m2/h. Here the team made a concession and opted for a concrete first floor. “It was an expense we could have done without, but we anticipate thermal mass will begin to get more credits under the code’s regulations in the future,” says Wilcox. The floor will be left exposed on the underside to help limit heat gain.

The walls are also finished in wet plaster, which will help with thermal mass, but also provide big pay-offs in achieving airtightness.

The proof, as always, is in the testing, and preliminary tests will be done in the coming weeks, prior to the plasterboard dry lining and fixtures and finishes going in.

The other key difference in the two homes is the energy supply. The level-six home needs to be totally self-sufficient. The electrical load for the house was calculated at 3.5kWh and on the south-facing roof 22m2 of photovoltaic (PV) tiles with a peak generating capacity of 3.7kW were installed. This is what drove the asymmetric roof design; according to Wilcox, it’s the only way they could get the area of PVs needed. The integrated tiles were seen as the neatest solution. “We should be able to pick these houses up and put them anywhere in the UK and one of the first things we have to clarify with planners is materials and this swayed our decision,” he says.

Both homes also have 3m2 of solar thermal panels to provide up to 70% of the hot water needs during the summer months, while a 10kW biomass boiler – which could supply up to six homes of this size – provides hot water and space heating via radiators. “This has a very positive effect on the code-four house. It puts it miles inside the requirements,” says Wilcox.

If a social landlord wanted a development of 60 houses, the most economic solution, according to Wilcox, is biomass, because the assessment tool SAP is so heavily in favour of it. “To offset a ground source or air source heat pump would require additional PVs and we can barely get what we need on the roof anyway. If we had needed another 1kW, it wouldn’t have worked.”

The houses are now in week 20 of the 35-week build programme. Building the homes has been relatively straightforward, but the hardest thing was getting the credits to stack up, says Wilcox. “Level four you can build easily, but six is very difficult. If you drop anything, you have to go straight back to the assessment and make sure you are still going to get enough credits. Often it is the site-based things that you might not have any control over, such as upgrading the ecology, that make the difference.”

If and when the houses get their final certification it will be mission accomplished. However, the plan is also to occupy and monitor them for the next 10 years to find out if the level-six home really is zero energy and to see which features work and which don’t. So these two plain-looking semis are just a start – but a distinctly promising one.